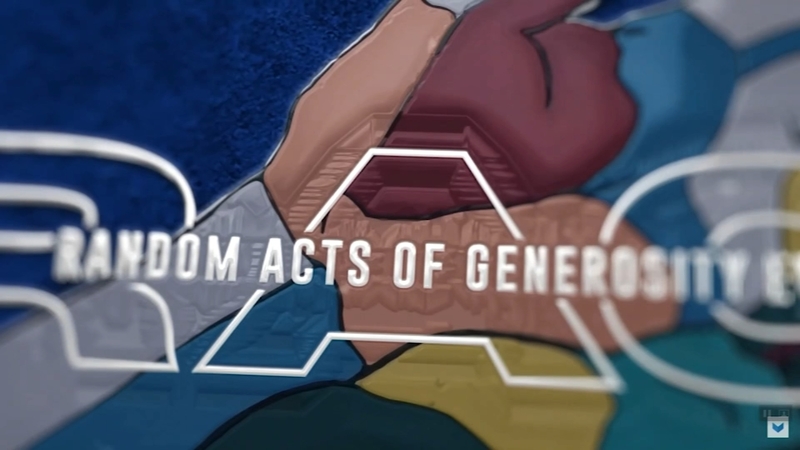 RALEIGH, N.C. (WTVD) -- They're calling it R.A.G.E -- Random Acts of Generosity Everywhere. It's Vision Church's aim to lead a movement toward small investments in minority-owned businesses that have struggled through the pandemic. And the north Raleigh congregation is challenging people in the community to do the same thing.

"I had not heard about it. I had no clue," said Eve Craig, franchise owner of Smallcakes, a dessert shop in Cary's Parkside Commons Shopping Center.

It has been six years since Craig opened her first franchise (she now owns three). But like so many small business owners, the past two pandemic years have been the hardest.

That's when Jerome Gay, Vision Church's pastor, walked through the doors of Smallcakes to start Random Acts of Generosity Everywhere.

"So, I didn't know about it. He explained to me what it was about. And I thought that it was amazing," Craig said.

Gay explained: "So, the Lord gave me this vision about two years ago," of his idea for some tangible display of faith through generosity.

Then, the pandemic hit. And the vision turned to survival for business-owning neighbors.

"Many businesses are really working themselves out of the red. And so, how can we as a church take an active role to sow back into the community as opposed to just asking people to sow into it," Gay said.

The RAGE initiative is aimed at helping any business in Wake, Durham and Johnston counties. But it especially wants to highlight minority-owned ones. Just 4% of businesses in the Raleigh metro area are currently Black-owned.

"A lot of people didn't know Smallcakes was Black-owned," Craig said with a smile. "So, for people to now know that it is Black-owned, I'm thankful for the platform where people can know."

Vision Church gifted $2,500 to Smallcakes to buy 600 cupcakes for Craig to give free to customers while supplies last. It may not sound like a lot, but after two years of canceled events, meaning canceled cupcakes, Craig said she was grateful.

"There were days where I'm working and you might make $200 at that, but you gave three, four or $5,000 in refunds," Craig said. "And so when you're digging yourself out of the hole, every little bit counts."

Gay is hoping the generosity is contagious. The church will continue to invest in businesses and also spread RAGE cards across the community. If someone gets one of Smallcake's free cupcakes, they will also get one of these cards. So, next time they might be a drive-thru, or someplace like that, they could pay for the next person's meal -- and pass the card along to them to do the same.