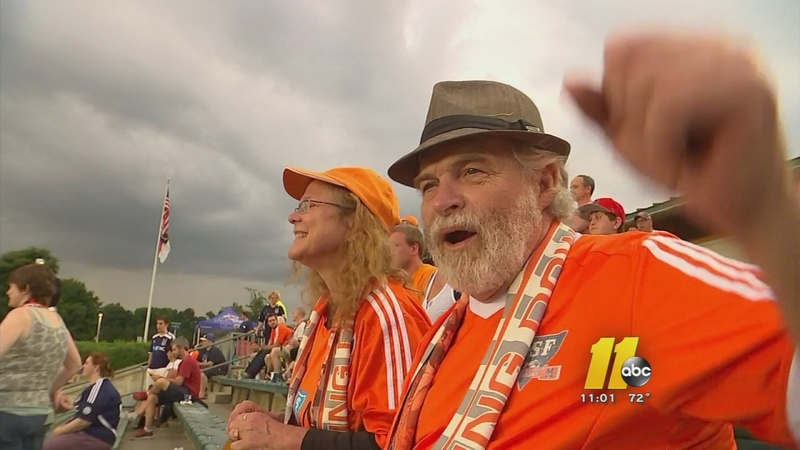 RALEIGH (WTVD) -- The Carolina RailHawks took to the field at WakeMed Soccer Park on Wednesday night to host a U.S. Open Cup match.

Many of the team's loyal fans are sincerely offended the RailHawks are now tied up in the ugly international scandal that rocked the soccer world Wednesday morning.

For many fans, the scandal has renewed their calls for new team ownership.

"We need an owner, yes we do! We need an owner, how 'bout you?" chanted the Triangle Soccer Fanatics. The RailHawks fan club added that snarky new chant to their repertoire Wednesday night as they cheered from section 309.

The group issued a news release earlier in the day pleading for the team's owner, Aaron Davidson, and his company, Traffic Sports USA, to step aside and sell the team.

Davidson and Traffic Sports are named in the sprawling federal indictment unsealed Wednesday morning. Davidson, along with some of the top executives from FIFA, is charged with delivering millions of dollars in bribes to secure big games and media contracts.

"They were expected to uphold the rules that keep soccer honest and to protect the integrity of the game. Instead, they corrupted the business of worldwide soccer to serve their interests and to enrich themselves," said U.S. Attorney General Loretta Lynch.

Reaction to the scandal was mixed at the RailHawks game.

"On one hand, I was happy because every soccer fan knows there's corruption in FIFA and we're tired of corruption in FIFA," said Scott Daughtrey, a RailHawk fan. "On the other hand, I'm upset because it's my team, this small Carolina RailHawk team that is being named."

"I want to enjoy the sport. I don't want to worry about the billionaires behind the scenes ripping people off. I just want to watch the game," Andrew Collins said.

But there is concern that the scandal could cripple Traffic Sports USA and subsequently jeopardize the RailHawks future as a franchise.

"I'm afraid that, yes, it will end Traffic USA- but I don't think it will end the RailHawks," Daughtrey said.

"The franchise is strong enough to where is they have to sell it off, someone will pick it up," said Duane Arnold.

Aaron Davidson and Traffic Sports USA have been entertaining offers to buy the RailHawks for some time now, but have been holding out for the best possible deal.

Wednesday's indictments may change the equation, paving the way for what the Triangle Sports Fanatics say they want: a new local owner to swoop in and buy their beloved team.