City Council to hear from critics, proponents ahead of vote on Raleigh Downtown South project 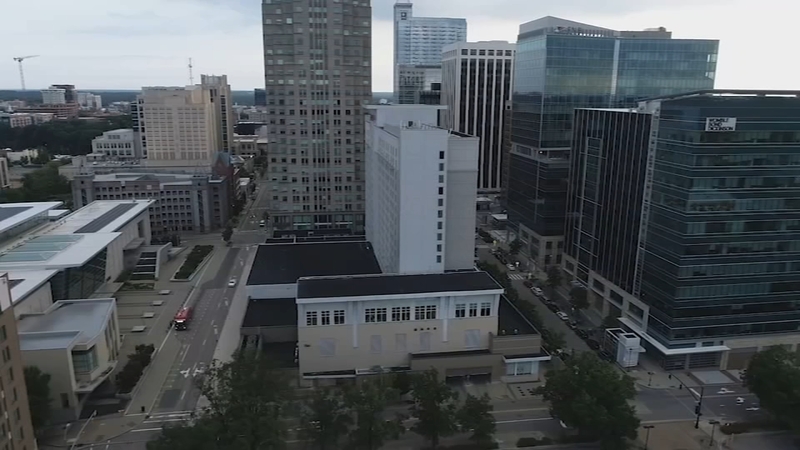 RALEIGH, N.C. (WTVD) -- A group of Wake County faith and community leaders is calling on the Raleigh City Council to reject a rezoning request for the proposed Downtown South project, arguing it doesn't go far enough to benefit the surrounding, historically marginalized communities of southeast Raleigh.

The rezoning application was already unanimously rejected by the city's planning commission ahead of Tuesday's city council meeting and public hearing on the matter.

Raleigh Mayor Mary-Ann Baldwin told ABC11 that the planning commission was actually split on the decision but voted it down to move the application forward and make sure it reached city council for a vote.

"We are up against a rigged clock," said Jemonde Taylor, Rector of St. Ambrose Episcopal Church and member of ONE Wake, the group petitioning the city council to halt the rezoning application. "Things have been moving incredibly fast."

Taylor said ONE Wake is asking the city council and the developer, Kane Realty, to ensure changes are made to the application, or an independent Community Benefits Agreement be in place before the city council votes the project forward.

ONE Wake has asked Kane to provide binding commitments on stormwater, affordable housing, living-wage jobs, and investment in minority and female-owned businesses.

Taylor said Monday that the group had not received an official response to its counteroffer and in its current form, the deal between the city and Kane does more harm than good.

"We are not against the development in general," said Taylor. "We are against this deal in particular."

ONE Wake is specifically calling for more affordable housing: 200 more units in addition to the proposed 100, keeping them affordable for 15 years instead of 5, and capping rent at $1,300 instead of $1,900.

Baldwin said the city cannot legally require a developer to include affordable housing as a rezoning condition and the Community Benefits Agreement that ONE Wake is asking for would not be enforceable.

"What is enforceable is a TIG grant, which if they don't live up to it, they don't get the tax break that would come with it," she said.

"It has the potential to be one of the greatest redevelopment stories in the history of Raleigh if done right," she said.

"We want community benefits, we're concerned that we address the stormwater correctly, we want affordable housing, we want green space and we want to do this all together, but when's the right time to do that?" Malik said. "The right way to do that is to have some funds for it so you have an enforceable agreement."

Baldwin said about 200 people, both for and against the rezoning, are signed up to speak during public comment of Tuesday's city council meeting.

She said the council could vote immediately following the public hearing.