Raleigh police: Woman injured after being hit by stray bullet during First Night 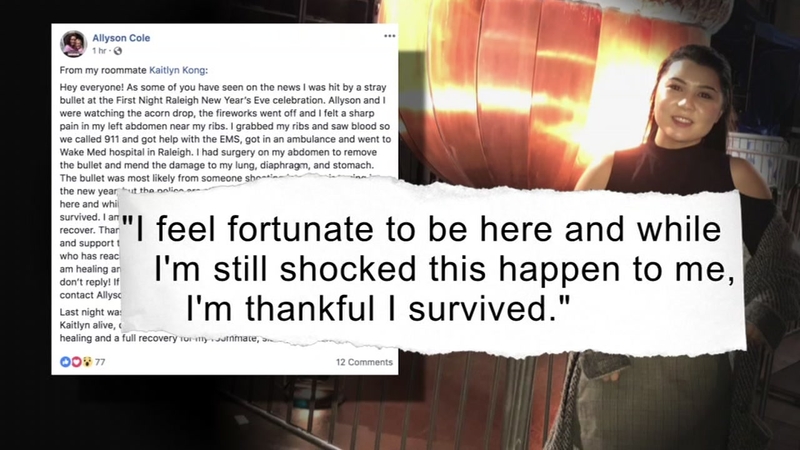 RALEIGH, N.C. (WTVD) -- Raleigh police are investigating after they say a woman was hit by a stray bullet at Fayetteville and Davie streets during the New Year's celebrations Monday night.

Kaitlyn Kong, 22, had surgery Tuesday on her abdomen to remove the bullet and repair damage to her lung, diaphragm and stomach.

"I grabbed my ribs and saw blood so we called 911 and got help with EMS, got in an ambulance and went to WakeMed," Kong said in a Facebook post after the shooting.

Kong detailed feeling a sharp pain in her ribs minutes after the acorn dropped.

She was downtown celebrating #firstnightraleigh and saw the acorn drop. Then just a few minutes after it dropped, Kaitlyn Kong felt a pain in her stomach. She had been hit by a bullet. @raleighpolice believe it had been from a gun shot in the air. #ABC11 pic.twitter.com/ohAd3wsmtZ

"I didn't want to believe it -- who gets shot downtown watching the acorn drop? I never expected to see someone shooting a gun in the air and it dropping down on people," Jeffrey Kong, Kaitlyn's dad told ABC11.

Kong is expected to be in the hospital for at least a week.

“I feel fortunate to be here and while I’m still shocked this happened to me, I’m thankful I survived.” Hear tonight from Kaitlyn Kong’s family. @raleighpolice believe she was hit by a bullet last night when someone fired a gun in the air to ring in #2019 #ABC11 pic.twitter.com/AK3pHq1uqp

"It's been very stressful: you don't expect that. Somebody could have easily gotten killed, had an eye taken out, could've went through her heart," Jeffrey Kong said. "It just perforated the corner of her lung, went through her stomach and bounced out and around somehow and missed all the other organs. It's amazing."

First Night Raleigh released this statement: "We are aware of the incident that occurred last night in downtown and understand it to be an ongoing RPD investigation."