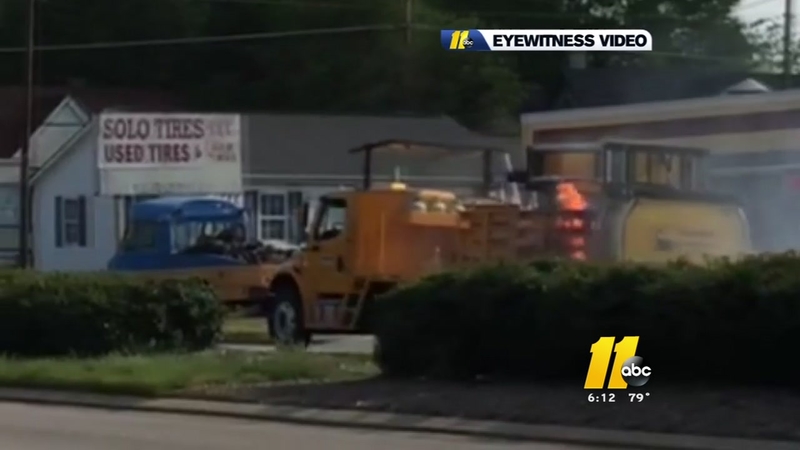 RALEIGH, North Carolina (WTVD) -- A man was burned Thursday morning when the truck he was driving burst into flames at a Raleigh gas station.

It happened around 9:15 a.m. near the Shell station in the 1600 block of South Saunders Street.

A driver with Apex-based Clark Pavement Marking was using a gas pump when an object in the bed of his truck caught fire. The male driver, who has not been identified, attempted to extinguish the flames but was unsuccessful.

Eyewitness accounts say the driver proceeded to leave the gas station after bystanders yelled for him to move the truck. Moments later, the driver could be seen heading north on South Saunders before coming to a stop near the Maywood intersection.

Within minutes, firefighters with the Raleigh Fire Department arrived and put out the flames. EMS crews transported the driver to WakeMed for what are likely to be second and third degree burn injuries.

The driver was en route to a construction site at Lenoir and South Streets in downtown Raleigh. Clark Pavement Marking Incorporated is currently listed as a contractor for the two-way conversion project headed by the City of Raleigh.

According to the North Carolina Department of Transportation, the company is a direct contract with projects in Chatham, Moore, Hoke, and Randolph Counties, and as a subcontractor for a project along I-95 in Robeson County.

Clark Pavement Marking Inc. was established in 1989 and in its nearly 30-year existence, only been cited for safety violations by OSHA twice -- 2009, and 2011.

According to the company's website: "The company is committed to the training and safety of not only its employees but also the employees of road construction contractors and the motoring public. Each year Clark Pavement Marking, Inc. employees participate in the North Carolina Department of Transportation annual pavement marking and work zone traffic control certification training. In addition the company provides instructors to lead this training."