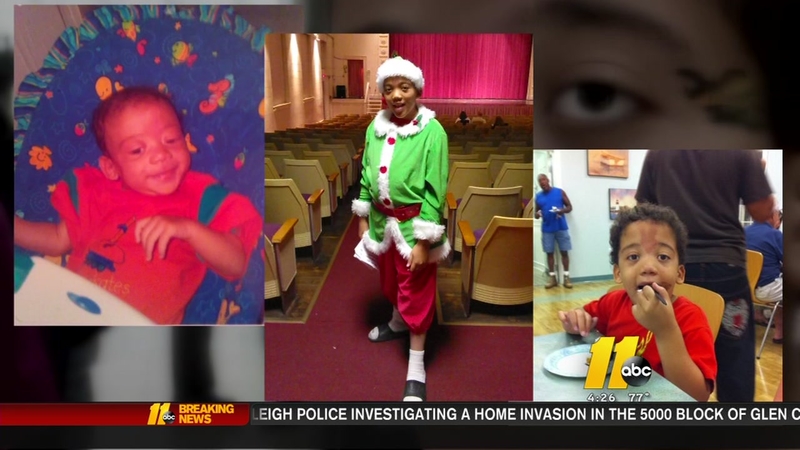 DURHAM (WTVD) -- Often times rare diseases go undiagnosed because most doctors have never seen them. And sometimes, getting the wrong treatment can be harmful for patients.

That's why Duke Hospital has joined a special registry to better identify rare conditions and work towards identifying those that don't yet have a name. It's something that's offering hope for Isaac Locklear and his family.

Shortly after he was born, his mom and doctors began to suspect something was amiss as he failed to meet traditional milestones.

"Probably very young, a couple months old, he just wasn't meeting any milestones. He was a couple weeks premature, so they said just give him a little extra time. But, it just continued... by a year he had had plenty of extra time and he wasn't crawling, wasn't doing any of those things," recalls his mom Teresa.

But, despite years of seeing specialists and undergoing countless tests, doctors were unable to determine the exact cause.

"In our case there's been more questions than answers. Every time we go one direction, then we actually get more questions," she shares.

Eventually the family ended up at Duke, where doctors were finally able to make some headway.

"Isaac was part of a research study at Duke in 2012 and we were able to identify a gene that we thought would eventually lead to a diagnosis for him," explains Duke Genetic Counselor Kelly Schoch.

But, just identifying the gene wasn't enough, so Duke enrolled Isaac in the Undiagnosed Diseases Network.

"The Undiagnosed Diseases Network is a research study. It's funded by the NIH and it consists of seven clinical sites or medical centers, Duke is one of those, as well as two genetic laboratories and some research laboratories. The goal of this collaboration is to really work together and find the diagnosis for patients who would've gone a long time without a diagnosis."

And, as Loren Pena, M.D. sees firsthand, it's actually more rare for genetic patients she sees to have a diagnosis than not.

"So, if the referring physician believes that they have a patient who has an undiagnosed disorder that has a genetic basis then this is the program for them. So that might be, the person has a number of birth defects, the person has a number of unexplained symptoms, there's a family history, that disorder runs in the family that is thought to be genetic. Those are all candidates for the program," she explains.

Both Dr. Pena and Schoch stress that this impacts more families than most would ever realize. Currently, there are more than 7,000 different rare diseases, affecting more than 30 million people in the United States alone, which breaks down to one in ten Americans. But, there's a lack of funding because many of these diseases don't have a name, let alone a foundation or organization behind them raising money for research.

"I don't think there's a big enough community awareness. It's not that people don't want to be involved, it's that they're not aware that over 1 million people in North Carolina have rare conditions," states Nina Verin, the organizer of a Rare Diseases Awareness Day event held recently in Chapel Hill.

In fact, that's why Verin started the event, to raise awareness and also connect families who otherwise can feel very isolated. Isaac and his mother were there, along with Erica Hines who first gave birth to a son with a rare, undiagnosed disease, only to later have the same thing happen with a second child.

"They're meeting lots of kids who have similar issues. I mean everyone here is 'different' and it's good for them to experience that," Hines says of the event. As parents, Hines and Locklear both said they appreciated the event, which also sought to educate patients and their families on Duke's involvement in the Undiagnosed Diseases network. And it's this involvement, ultimately, that they are hoping will finally lead them to the answers about their children's conditions they so desperately seek.

If you or someone you know has a rare genetic disease you can join the undiagnosed disease network by signing up through a patient portal with a doctor's referral. For more info: