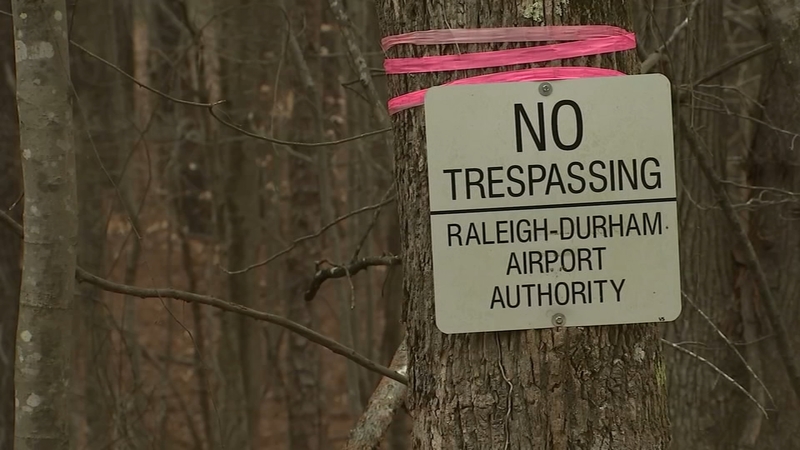 MORRISVILLE, N.C. (WTVD) -- Activists who oppose expanding a quarry or adding a fence on undeveloped RDU airport land are proposing a complex called "RDU Forest Village" that would include conference centers next to entertainment and recreation areas.

"That would provide sustainable long-term revenue for the RDU airport, as well as a tremendous community asset and 50 miles of mountain bike, pedestrian trails," said Dr. Jean Spooner, Chair of The Umstead Coalition.

She's modeling the complex after Snowmass Village in Colorado, where you can ski, hike and more.

Tamara Dunn lives near the undeveloped airport land in question, where many hike and bike illegally.

The RDU Authority COO has said the 18-mile long perimeter fence would enhance security and keep trespassers out. Dunn said the complex would be a better alternative to expanding the quarry or adding a fence.

"The fence will be a lot like living at Alcatraz," Dunn said. "We will be surrounded with 9-foot fence with razor wire on the top of it. It will come right up to our property line."

When it comes to the quarry, the RDU Airport Authority said it entered into a land-lease agreement (with Wake Stone Corporation), which will generate at least $24 million to pay for more gates, a new runway and more at the airport, saying:

"The Airport Authority is open to reviewing proposals that complement the land-lease agreement, but will not consider speculative plans with no revenue forecasts or committed investors."

Spooner contends it's not too late to change course.

"We have offered real money to the table and real alternatives and real professional analysis," Spooner said.

But the RDU Authority said a judge ruled the land-lease agreement can move forward.

"The Airport Authority has entered into a land-lease agreement that will generate at least $24 million to pay for important construction projects like adding more gates in our terminals, building a new runway and improving our roads. When RDU asked the community to submit business proposals for undeveloped airport property, the land-lease proposal was the only submission that satisfied all conditions while guaranteeing substantial revenue for airport use. The Airport Authority is open to reviewing proposals that complement the land-lease agreement, but will not consider speculative plans with no revenue forecasts or committed investors."
Report a correction or typo
Related topics:
real estatemorrisvillewake countyraleighdurhamrduairport newsrecreationraleigh durham airportparkdevelopmentairport security
Copyright © 2021 WTVD-TV. All Rights Reserved.
TOP STORIES
Uber adds new safety feature for Raleigh, Durham riders
LATEST: COVID positivity rate above 9% for second time in 2 weeks
Reaction after money in walls of Lakewood Church, which Osteen heads
NC Chinese Lantern Festival seeing record attendance
Mark Meadows to halt cooperation with January 6 committee
Amber Alert issued for 1-year-old Randolph County girl
Show More
Toyota to build lithium battery plant in NC
50 mutations in omicron could be its downfall, data shows
Why feds are warning it could take months to get a passport
Raleigh Police plan to crack down on speeding drivers
This day in history: Pearl Harbor attacked
More TOP STORIES News