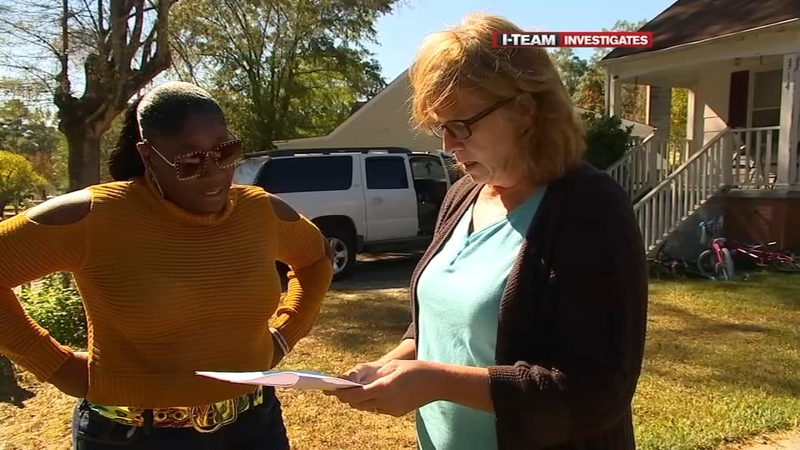 RALEIGH (WTVD) -- Today we have Homeowners Associations (HOAs), but decades ago residents relied on neighborhood covenants to govern subdivisions.

The ABC11 I-Team has found two such covenants still on the books at the Wake County Register of Deeds and, unbeknownst to most residents, they contain language that today is widely considered offensive.

The covenants -- one for Hillside Park in Fuquay-Varina, and one for Anderson Heights in Raleigh -- include the following: "No person of any race other than the Caucasian race shall use or occupy any building or any lot, except that this covenant shall not prevent occupancy by domestic servants of a different race domiciled with an owner or tenant."

Wendy and Tony Stephenson, whose home on Wade Street was part of the original subdivision built by Fuquay Homes Inc., were shell-shocked by the I-Team discovery of the covenant still on record.

According to a map submitted to the Register of Deeds, Hillside Park is a subdivision of 68 homes between Spring Street and Vance Street to the north, and from Angier Road to Wade Avenue to the east.

Anderson Heights, a subdivision built by J.J. Fallon Co., comprises 53 homes in and around Oxford Road and Royster Street in Raleigh. The active covenant there dates to Nov. 4, 1948.

The Stephensons said they bought their home in Fuquay-Varina two years ago and were never made aware of the covenant, which was notarized on Oct. 16, 1946.

"It's just mindboggling to me," Wendy said. "The character of this neighborhood is everyone gets along great. It's not the color of your skin. It's the people. We have very good people on this street."

More than 70 years later, the vast majority of homeowners in both neighborhoods are new and were likely left in the dark about the covenant and its clauses that govern how they renew or expire.

"These covenants are to run with the land and shall be binding on all parties and all persons claiming under them until January 1, 1975, at which time said Covenants shall be automatically extended for successive periods of 10 years unless by vote of a majority of the then owners of the lots it is agreed to change said covenants in whole or in part," the Anderson Heights covenant reads.

The Hillside Park, likewise, mandated automatic extensions every 10 years unless by a vote of the majority of "then owners of the lots."

Despite their being legal documents enrolled with the Register of Deeds, legal scholars agree the neighborhood covenants -- especially the racial clauses within them -- cannot be enforced.

"I wouldn't call it meaningless, because it sends a message that we don't want sent in society, but it's unenforceable," Jim McLaughlin, a professor at Campbell University and expert on property law, told ABC11. "You can't prevent anyone from another race from coming into your neighborhood. We don't prevent that. That's a big no-no."

McLaughlin said when the covenants were first written, local courts were able to issue injunctions to prevent violations, but the Supreme Court's ruling in Shelley vs. Kramer quickly forbid the kind of racist rules that were common in the South prior to the Civil Rights Movement.

"Private agreements to exclude persons of designated race or color from the use of occupancy ... is violative of the equal protection clause of the Fourteenth Amendment," Chief Justice Fred Vinson wrote for the majority in May 1948. "Equality in the enjoyment of property rights was regarded by the framers of that Amendment as an essential pre-condition to the realization of other basic civil rights and liberties which the Amendment was intended to guarantee."

Still, McLaughlin said the fact that the covenants are unenforceable doesn't render them irrelevant, and he encourages the two neighborhoods to band together and vote to repeal.

"It's the message. It's the symbolism," he said. "It's important what we tell people. If you go to the court house and read this, I'm thinking, 'Damn, this is not good.'"

Wendy and Tony Stephenson agree, and they're promising to petition their neighbors to repeal the covenant.