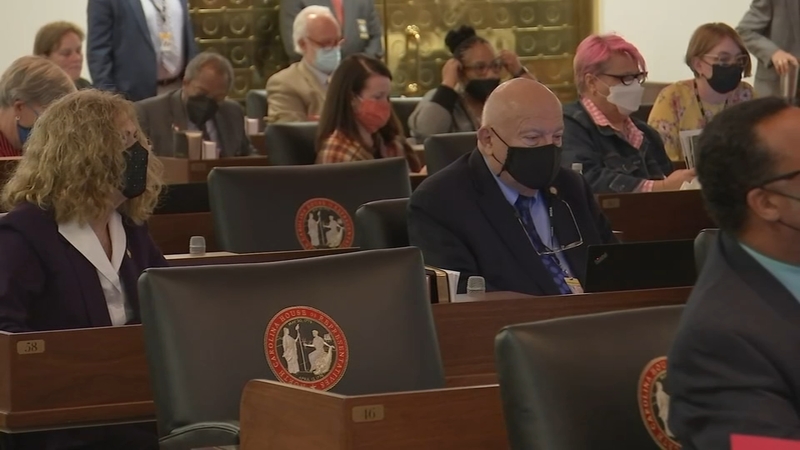 RALEIGH, N.C. -- Under a court order to make their redistricting lines fairer, North Carolina Republican lawmakers on Wednesday unveiled new maps that appear to improve Democratic chances to gain seats in Congress and possibly win General Assembly majorities in a very strong year for the party.

The new plans must be voted on and approved in some form by a Friday deadline set by the state Supreme Court, which recently struck down congressional and legislative district lines enacted in November. The GOP-controlled General Assembly was likely to enact these new plans - set to be used for this year's elections - by Thursday.

A slim majority of justices had ruled along party lines that the earlier district boundaries violated the state constitution as illegal partisan gerrymanders. Voters and advocacy groups that successfully sued to overturn the lines said they would have ensured Republican victories in 10 of the 14 states' U.S. House seats on ballots in the fall and GOP legislative majorities in almost every political environment, even though statewide elections are usually closely divided.

The lines that were voided prevented a similarly large bloc of voters - namely Democrats - from having a fair opportunity to increase their political influence, violating the state constitution's free election and equal protection clauses among others, the justices ruled.

"The Supreme Court held that our maps must 'give the voters of all political parties substantially equal opportunity to translate votes into seats across the plan,'" House Redistricting Committee Chairman Destin Hall of Caldwell County said while describing a new map for the 120 state House districts. "And that's exactly what the map before you today does."

A congressional district map unveiled earlier Wednesday by Senate Republicans would have favored Republicans winning seven of the 14 seats and Democrats five, according to an analysis of the results of a dozen 2016 and 2020 statewide election results, as provided by legislative staff.

Two districts without incumbents - one in the south-central Sandhills region and the other that includes part of Charlotte west to the edge of the Blue Ridge Mountains - would appear very competitive.

By late Wednesday, however, senators had pulled back the plan, saying it needed more work to ensure it met statistical thresholds on partisan fairness that the justices identified as potential standards. Sen. Warren Daniel of Burke County, a co-chair of the Senate redistricting panel, said that could result in creating additional districts that are deemed competitive.

Republicans currently hold eight of the state's 13 U.S. House seats. North Carolina is gaining a 14th seat based on population growth from the 2020 census.

State House and Senate plans, released by Republicans in their respective chambers, would still favor the GOP to win majorities, which they have held since 2011. But the analysis of election results on the replacement maps projects would make it challenging for Republicans to earn veto-proof majorities - 72 seats in the House and 30 in the 50-seat Senate.

The full House passed replacement district boundaries for its chamber by a 115-5 vote Wednesday night, after members voted for a handful of consensus amendments that adjusted lines in several counties.

The "House map we have agreed to is consistent with the court's decision on partisan fairness," Minority Leader Robert Reives of Chatham County said in a news release before the amended plan was approved 115-5. The plan still must pass the Senate, expected to be a formality.

"I am proud of the bipartisan vote today and that we have passed a State House map for North Carolina," House Speaker Tim Moore, R-Cleveland, said. "Furthermore, I am confident that the House has passed a map that complies with the court's guidelines and will be upheld in court."

No such bipartisan agreement had been reached on the Senate districts. Senate leader Phil Berger and Minority Leader Dan Blue had met several times over the past week but failed to reach a consensus, Berger said.

Blue said after a Senate Redistricting Committee meeting that the GOP plan fails to address the crux of the Supreme Court's decision - Democrats should have as good a chance as Republicans to win a majority if their candidates receive more votes over time.

"It's still a partisan gerrymander," Blue told reporters. "It's up for the court to decide whether the gerrymander has been repaired."

The replacements for the maps must be handed by late Friday to a trial court panel, which will have until Feb. 23 to decide whether the plans meet the Supreme Court's standards. If the maps fail under those standards, a court will draw the new lines.

The districts are supposed to be ready for the Feb. 24 resumption of candidate filing for the May 17 primary.
Report a correction or typo
Related topics:
politicsraleighncvotinggeneral assemblystate politicsredistrictingnc primary
Copyright © 2022 ABC11-WTVD-TV/DT. All Rights Reserved - The Associated Press contributed to this report.
TOP STORIES
New NC flood monitoring system ready for next big storm
Homeless veterans get an assist from Durham's Rotary Club
Shelf cloud seen in Raleigh ahead of line of storms
Truck slams into NC woman's new home
Father puts 1,000 miles on his car to find specialty formula
Student says he was told not to mention 'Don't Say Gay' law in speech
Clayton police arrest man in shooting that injured 1
Show More
More than 75,000 pounds of baby formula lands in US amid shortage
Report: Top Southern Baptists stonewalled sex abuse victims
Arby's is selling a fast-food staple it's never offered before
Biden: US would intervene with military to defend Taiwan
Wake County begins giving COVID booster shots for children ages 5-11
More TOP STORIES News