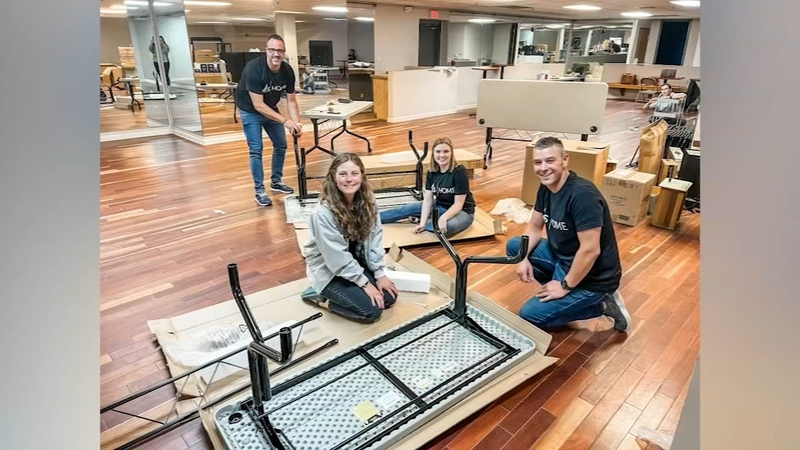 RALEIGH, N.C. (WTVD) -- ABC11 got its first look inside the brand-new welcome center for Refugee Hope Partners in north Raleigh. A small army of volunteers has been working for months to turn an old dance studio into the first-ever brick and mortar building for the 4-year-old non-profit that has help resettle 1,200 refugees from 40 nations and is now in the midst of what will be its busiest year yet.

"We have this crisis happening in Ukraine. We had thousands of refugees from Afghanistan flee to America. And we've been welcoming them here to our city since October," said communications director at Refugee Hope Partners Amanda Herbert.

The U.S. withdrawal from Afghanistan combined with Russia's invasion of Ukraine sent refugee numbers skyrocketing. Women, children and families were forced from their homes seeking safety. Last year, 200 refugees resettled in the Triangle. In 2022, over 2,000 are expected here, Herbert cited.

"And our goal was to be able to serve 25% more refugees, this year. We already met that goal in quarter 1," Herbert said. "So, we're changing our model and ready to welcome more people."

They say the welcome center will do just that, make people seeking refuge feel welcome by helping navigate a new country and new city all the way down to finding grocery stores, paying bills or setting up email accounts.

"We're here to just walk alongside people and help them connect those dots. And we wanna see people go towards independence," said Herbert.

Finishing touches for the new Welcome Center for Refugee Hope Partners in N Raleigh. After Afghanistan and then Ukraine, the Triangle is expecting to resettle a record number of refugees in 2022.
We’ll go inside at 11. #abc11 pic.twitter.com/Rb9E5NIhNU

Since Russia's invasion, ABC has documented the Triangle step up time and again for Ukraine. There's a new update from MG Guerra. The Apex businessman and his wife launched a Facebook campaign over the winter seeking donated frequent flier miles to help Ukrainians flee the war zone.

Guerra now tells ABC11 the efforts have raised 20 million frequent flier miles. Over 600 Ukrainians have been flown to safety.

"I had an idea that we would bring quite a few people together to help me with this effort. But I really did not know that it was going to expand as big as it did.," Guerra said.

Guerra says there's still a need for more miles, and he and wife are also focused on a new campaign to connect Ukrainians with American sponsors called United for Ukraine.