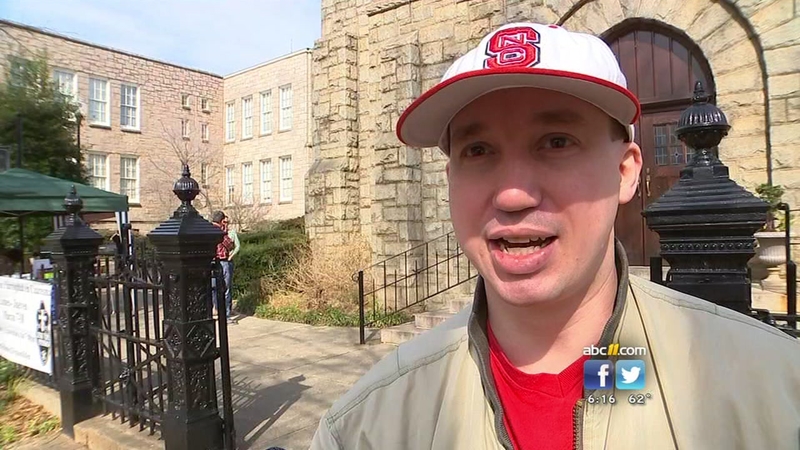 RALEIGH (WTVD) -- It was a busy week for Pope Francis; not only did he return from a pilgrimage to Mexico, but he also fielded questions on a couple of hot topics.

One of those questions dealt with Republican presidential contender Donald Trump's call to build a wall to keep Mexican immigrants out of the U.S.

Earlier this week, Pope Francis told reporters, "a person who thinks only about building walls, wherever they may be, and not building bridges, is not Christian."

That drew a fiery response from Trump, who initially called the comments "disgraceful," and later made the remark that the pope has an "awfully big wall at the Vatican." It was an exchange that was on the minds of many heading to mass this weekend, especially those siding with the pope.

"We should love each other, not [be] making walls and stuff like that. No, that's not right," stated Christina Gomes outside Sacred Heart Cathedral in Raleigh.

"I kind of agree with the pope, although I would have worded it differently," shares fellow Catholic John Sisk.

A spokesperson for the pope later insisted that the Pope Francis was in no way launching an attack on Trump, but was merely reiterating a message he often preaches in general about building bridges, not walls.

"I don't think the pope was judging him, I think he was judging what he said, his comments or actions toward building a wall," explains local parishioner George Dike.

The pope also made the news this week for comments about contraception to prevent birth defects caused by the Zika virus. Pope Francis said "avoiding pregnancy is not an absolute evil," seeming to soften his stance that it would be ok in those countries affected by the health crisis.

It's a change for devout Catholics, but one that they say makes sense.

"I think if it's something that has to be done to protect a pregnant woman it should be done. They should have an opportunity to protect themselves and their babies," says Patrick Gomes.

However, Pope Francis did unequivocally reject abortion as a response to the Zika crisis.