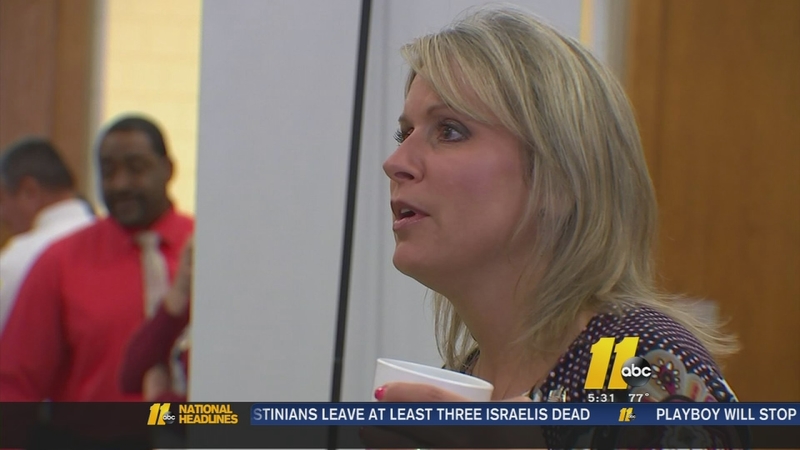 FAYETTEVILLE, N.C. (WTVD) -- Two media outlets, including ABC 11, were refused interview access to Representative Renee Ellmers on Tuesday. Ellmers and her team set ground rules that would not allow reporters to ask about the alleged affair rumors tied to the House Speaker debacle.

We did not agree.

Ellmers was in Fayetteville Tuesday morning for her signature "Recruit-A-Vet" job fair event. The Sandhills event was one of the Congresswoman's first public appearances since California Representative Kevin McCarthy shocked Washington by dropping out of the House Speaker race. A GOP tipster sent party representatives a slew of emails alleging an extramarital affair between Ellmers and McCarthy, suggesting it was behind McCarthy's sudden bow out of the race.

Behind closed GOP doors Friday evening, Ellmers apologized to colleagues for the frenzy, calling the allegations "bat (expletive) crazy" rumors. She later released a statement dismissing the allegations, saying "Now I will be praying for those who find it acceptable to bear false witness."

Prior to the Fayetteville event, Ellmers' team contacted local media outlets, requesting the McCarthy questions be off-limits during the job fair event. Earlier on Tuesday morning, she appeared on WFNC's Good Morning, Fayetteville radio show saying she's surprised with 'what passes for news these days." She also called the affair allegations "the ugly side of politics."

Upon arrival at the event, ABC 11 informed Ellmers' staff that the station wanted to interview Ellmers about the job fair, who she was pulling for in the Speaker race, and how the affair rumors have affected GOP business. Her team seemed willing to grant access to the Congresswoman if the Speaker race questions did not include inquiries about McCarthy. Ellmers had directed them not to grant access to outlets that would head in that direction of questioning.

Following Ellmers meet and greet with local employers and veterans, ABC11 followed two other outlets to an interview room, where Ellmers was flanked by FTCC security.

The following is the exchange between ABC 11 and Ellmers' spokeswoman, which ended in the door shutting.

ELLMERS: (speaking to two media outlets): "You all tell me where you want to be."
NICOLE CARR: "Can we talk to her?"
BLAIR ELLIS: "If you all are going to...Hi. Am I on the record?"
NICOLE CARR: "Yes."
ELLIS: "The Congresswoman's going to be discussing the veterans' job fair today, given that's what today's event is for. "
CARR: "Can we talk to her about that?"
ELLIS: "About the job fair? Yes."
CARR: "Yes?"
ELLIS: "Yes. Only the job fair."
CARR: "Alright, can-(Door shuts)"
CARR: "Alright (Carr laughs). There we go...."

"The congresswoman's a tough cookie," said Ellis. "She is a great lady, and she look forward to continuing to serve those in the second district with honor and integrity."