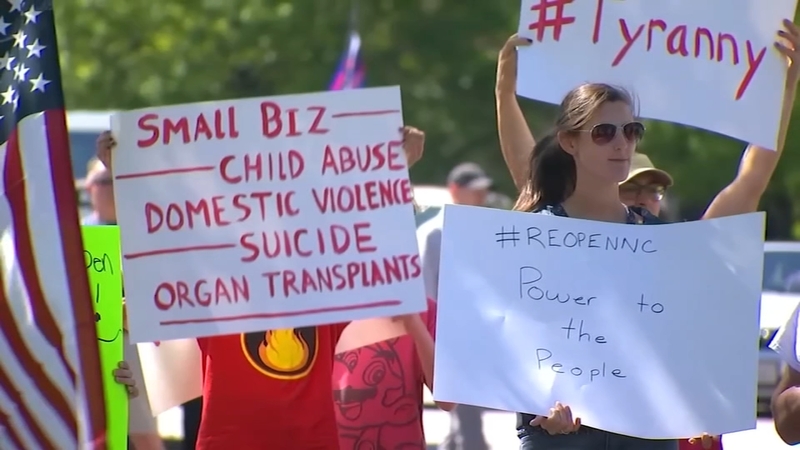 RALEIGH, N.C. (WTVD) -- The group Reopen NC hopes to apply pressure on Gov. Roy Cooper to reopen nonessential businesses before his executive stay-at-home order expires on April 29. The group argues that their cause is nonpartisan and is about right-versus-wrong.

Ashley Smith, a small business owner from Western North Carolina is one of the co-founders of Reopen NC. Smith says the Governor's stay-at-home order is violating North Carolinians' freedom.

"That's the driving force behind this movement. Our Constitutional rights to work and to provide for our families to take care of ourselves, to life, liberty and the pursuit of happiness among other personal liberties are being trampled on more right now," Smith said.

Smith says Tuesday's rally will be a little different from last week's rally.

Smith says for the second rally, the group will be working with Raleigh Police to ensure they are following social distance requirements, and they will have attorneys present to advise them.

Despite rumors, the co-founder says the group is not receiving any funding and that they are not busing people to the event.
"We did have an offer and we have turned it down. And if there are buses there, we are not affiliated with that," said Smith. "No one is being paid for anything. We're 100 percent grassroots."

But organizers with Stay Home NC are pleading with people not to participate in Tuesday's rally.

"You're putting more people at risk by going out to an event like this," said Michael Morgan, the self-proclaimed organizer of Stay Home NC after learning about the rivaling group.

While at Wake Forest University hospital last week, Morgan, who has cancer, said he had some cold-like symptoms. He tested negative for COVID-19.

Morgan says Stay Home NC posts messages of encouragement, details about the stay-at-home order, and how to stay active and engaged during isolation.

"We're all going to make it through. But let's do it safely. Wouldn't you rather be alive and have money?" Morgan said.