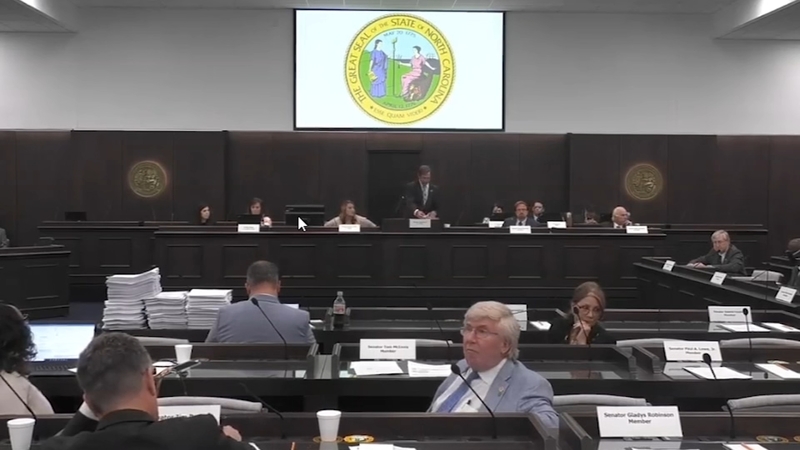 RALEIGH, N.C. (WTVD) -- The North Carolina General Assembly reconvened on Monday in Raleigh for its short session where a projected revenue shortfall worth billions of dollars looms large.

"Despite these untraditional times, it's imperative the legislature continue to do its work on behalf of people in the State of North Carolina," Senate President Phil Berger, R-Rockingham County, said at a news conference. "Our citizens have had to make changes to their daily lives. The legislature is no different."

Lawmakers this year already passed a sweeping coronavirus relief package, but that was worth $1.7 billion of federal money allocated by the CARES Act.

The budget for the next fiscal year, instead, appropriates more than $20 billion in tax revenues paid by North Carolina residents and collected by the state to pay for everything from education to transportation to health care. Fewer people working, fewer people shopping and fewer people traveling, however, could amount to a cash shortage of up to $4 billion.

"Despite our revenues taking a hit, we've built up a healthy Rainy Day Fund and are better positioned to respond to the financial impacts of this pandemic," Berger said. "So, you'll see bills to support K-12 education, universities and community colleges, the N.C. Promise tuition program, state park facilities, infrastructure, and more."

Still, the new reality may be no match for the old divisions that prevented the state government from passing a budget even in affluent times, and the impasse over expanding access to Medicaid and raising teacher salaries could again prove debilitating.

"In normal times when we had a normal functioning economy with North Carolinians at work and not facing a pandemic, Medicaid expansion made great sense economically and for the bottom line of keeping people healthy," Rep. Grier Martin (D-Wake County), told ABC11. "Now that we've got a threat to the health and wreaked havoc on our economy, Medicaid expansion makes even more sense."

Though Republicans still retain majorities in the House and Senate, Democratic gains in the 2018 election broke supermajorities and empowered Gov. Roy Cooper to hold significant leverage with his veto power.

Berger said he expects the short session to wrap up by the end of June, but that could easily be extended. With the November election also approaching, it's possible lawmakers also dig deeper into their own trenches before hitting the campaign trail.
Report a correction or typo
Related topics:
politicsraleighncstate politicsgeneral assemblycoronavirusstay at home order
Copyright © 2022 WTVD-TV. All Rights Reserved.
TOP STORIES
Snow, sleet, freezing rain expected again this week
NC legislature votes to further delay primaries until June 7
Voting bill collapses, Democrats unable to change filibuster
'We can't get any more': Stores struggle to restock shelves
Third arrest made in Black Friday shooting at Streets at Southpoint
Daniel Turcios shot 5 times after crash on I-440, RPD reports
'He was special': Durham friends remember Andre Leon Talley
Show More
Cumberland County mom spins way to $500,000 lottery prize
Victim in fatal I-85 crash was just 3 months old
19-year-old military driver charged in wreck that left 2 Marines dead
Earnhardt Jr. to be inducted into NASCAR Hall of Fame
Raleigh man feels lucky to be alive after bullet found above his bed
More TOP STORIES News