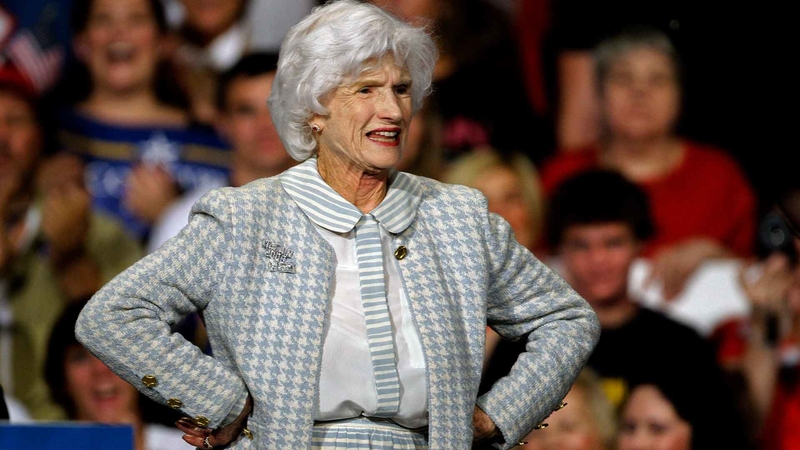 WASHINGTON -- Roberta McCain, mother of the late Sen. John McCain, has passed away at the age of 108.

The announcement was made Monday by John McCain's widow Cindy McCain.

It is with great sadness that I announce the death of my wonderful Mother In-law, Roberta McCain. I couldn’t have asked for a better role model or a better friend. She joins her husband Jack, her son John and daughter Sandy.

John McCain's daughter and co-host of "The View" Meghan McCain remembered her grandmother via Twitter.

I love you Nana. You’re everything I ever aspired to be. Thank you for teaching us all about living life on your own terms with grit, conviction, intensity and love. There will never be another one like you, you will be missed every day. I wish my daughter had gotten to meet you. pic.twitter.com/yy9sM8cG6i

In 2018, John McCain, the six-term Arizona senator and 2008 Republican presidential nominee, died at the age of 81, more than a year after he was diagnosed with glioblastoma, an aggressive form of brain cancer.
EMBED More News Videos

John McCain, the six-term Arizona senator and 2008 Republican presidential nominee, died Saturday at the age of 81, more than a year after he was diagnosed with glioblastoma, an aggressive form of brain cancer.

The son and grandson of Navy admirals, McCain was a former Navy pilot and was held as a prisoner of war in Vietnam for more than five years. He was elected to Congress in the early 1980s and elected to the Senate in 1986, replacing retiring Barry Goldwater. McCain gained a reputation as a lawmaker who was willing to stick to his convictions rather than go along with party leaders, a streak that drew a mix of respect and ire.

McCain underwent surgery in July 2017 to remove a blood clot in his brain after being diagnosed with an aggressive tumor called a glioblastoma, the same type of tumor that killed Sen. Edward M. Kennedy at age 77 in 2009.

McCain rebounded quickly, however, returning to Washington and entering the Senate in late July to a standing ovation from his colleagues. In a dramatic turn, he later cast a deciding vote against the Republican health care bill, earning the wrath of Trump, who frequently cites McCain's vote at campaign events.