Noose in Rocky Mount, racist rant in Fayetteville: What does it mean for this moment of social change? 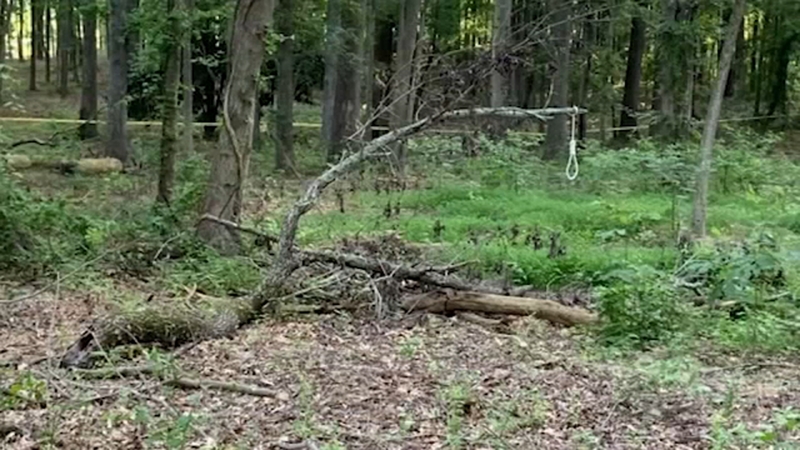 City leaders relented in early June and this was the week crews came to move what some Black residents here refer to as the "idol of intimidation."

"We woke up in the morning excited knowing today was the day," said Cooper Blackwell, a local activist and Rocky Mount Human Relations Commission member.

Activists in Rocky Mount believe white supremacists left this noose in Battle Park as a message of intimidation after the city moved the divisive Confederate monument from that civic space this week. #abc11 pic.twitter.com/8Hix3k0vLM

ABC11 spoke to Blackwell along with Troy Davis, a young Rocky Mount developer about the moment their excitement over the monument's removal turned to horror.

"When we arrived on the scene to rejoice together and watch the statue come down, some members of our community saw that there was a noose."

There was a short white noose tied to a tree to the left of the Confederate statue. They believe it was tied there as a message of intimidation.

"We've seen a number of tactics of intimidation in our community," Davis said. "I took the message as, 'This is nothing to be touched with. Do not touch this statue. And if you touch it, this is the result. We will hang you from a tree.'"

A few miles south on I-95, a video was going viral from the Kings Cross Apartments in Fayetteville.

A few miles south on I-95 a video was going viral from the Kings Cross Apartments in Fayetteville.

A Black Fort Bragg soldier had arrived to visit a friend when a white woman who lived there was in the midst of a loud and unexplained racist rant on the apartment steps -- screaming she hates black people; and when she notices him filming, she hurls the n-word at him.

A white woman in Fayetteville has been evicted from her apartment complex after video of her racist rant aimed at her black neighbor went viral. #abc11 pic.twitter.com/eN8BMkLCKg

"There is no doubt that there is going to be a reaction to change. And some people are better equipped to handle that change," said Dr. Deborah Stroman, a UNC professor and instructor at the Racial Equity Institute.

Stroman spoke to ABC11 to help make sense of the disturbing episodes.

She suspects some are cracking under the pressure of this climate of social change and movement toward racial justice.

"People are feeling a sense of 'I'm losing something. I don't have a grip on what I've always believed to be true,'" she said. "They're seeing whites, blacks and brown people coming together and that is very, very disturbing, scary for them."

But, in this moment where the nation and the state has seen so many hopeful signs of racial unity in the days and weeks since Floyd's death in Minneapolis, ABC11 asked Dr. Stroman whether it was naive to believe the country was on the brink of a more racially-united tipping point.

Tonight at 11, we look at these recent episodes of racism and racial intimidation amid this greater moment of social change
• • •
“There is no doubt that there is going to be a reaction to change. And some people are better equipped than others to handle that change.” #abc11 pic.twitter.com/aGTyoFiMfC

"Well, I don't think you were naive. You were hopeful and that's what we want. We want hopefulness in the midst of brutal facts," Stroman said. "The most important thing is to focus on the structural racism. What are the institutions doing?"

Back in Rocky Mount, police told ABC11 they have confiscated the noose and are now investigating who put it there.