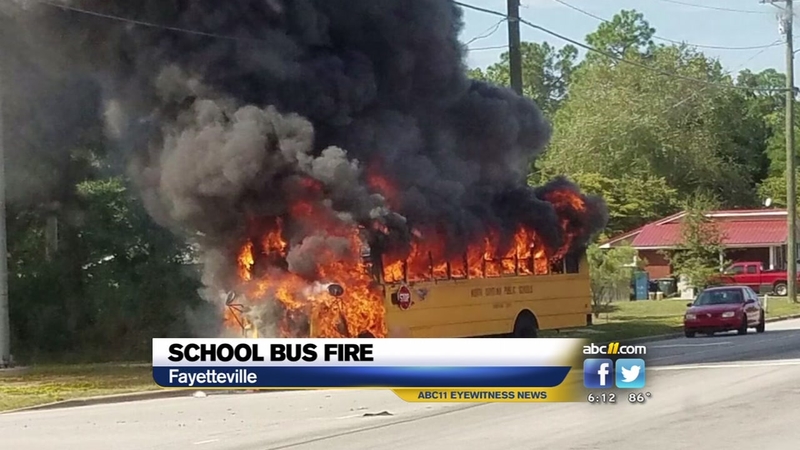 Students out safely before Fayetteville bus bursts into flames

FAYETTEVILLE (WTVD) -- A quick-thinking Fayetteville school bus driver is being called a hero after she noticed smoke and got 15 middle-school students off the bus before it became engulfed in flames Wednesday.

It happened about 3 p.m., at the intersection of Bingham Drive and Bailey Lake Road in Fayetteville.

One student told ABC11 that the bus was making strange noises. He saw smoke coming from the front of the bus, then heard an explosion.

"Big cloud of black smoke," said student Samuel Flores. "Next thing you know, it was on fire."

The students were from 71st Classical Middle School.

The fire was quickly put out but the bus sustained heavy damage.

Crews were able to bring the fire under control quickly.

The bus driver, identified as Vaster Robinson, saw some smoke and moved quickly and calmly to get the children off the bus, witnesses said.

Robinson, who has been driving school buses in Cumberland County since the mid-1990s, took the students to a Food Lion parking lot across the street to wait for help. Another bus arrived to pick up the students.

A rear view of the burned school bus.

There were no injuries.

The cause of the fire is still under investigation.