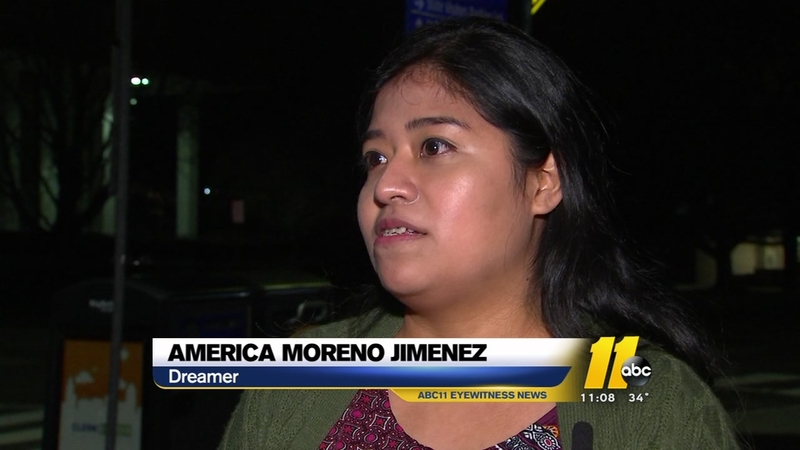 RALEIGH, NC (WTVD) -- A Wake County school teacher will be in the audience Tuesday night when President Donald Trump delivers his first State of the Union address.

America Moreno Jimenez, a DACA recipient and EDL teacher at Sanderson High School, will be a guest of Democratic US Rep. David Price.

"I just want to go in knowing that I held my head high and that I said whatever I had to say with confidence and pride and resolution in my heart to know that I'm doing the right thing," she said.

Jimenez's DACA permit is expiring in the summer and she could be going back Mexico, which she left at 2 years old.

This @wcpss teacher is driving up to Washington D.C. right now & will be attending #StateOfTheUnion tomorrow. She’s a #DACA dreamer and says she wants resolution whether it’s favorable or not. @abc11 pic.twitter.com/CsVIzO14fv

She wants resolution in the ongoing debate.

"I just want to live my life," she said. "It's hard to know my community and myself are being constantly talked about. Sometimes it's positive, but it's mostly negative and it's tough."

He said, "Her passion for giving back to the community where she grew up is a testament to the story of many Dreamers in our community and our country. Despite the persistent uncertainty and fear created by her immigration status, America persevered to graduate high school, college, and graduate school. Then, because of the DACA program, she was able to become a certified ESL teacher, filling a crucial need in our state and serving an often overlooked student population. Her success is one of many inspiring stories of Dreamers who came to America as children and have made incalculable contributions to the only nation they have ever known."

The White House has unveiled a proposal that provides a pathway to citizenship for 1.8 million young immigrants living in the country illegally.

The plan, though, comes with other conditions. First, new restrictions on legal immigration. Second, $25 billion for border security.

The proposal was applauded by some in Congress but slammed by a slew of Democrats, who accused President Trump of holding dreamers hostage to his hard-line immigration agenda.