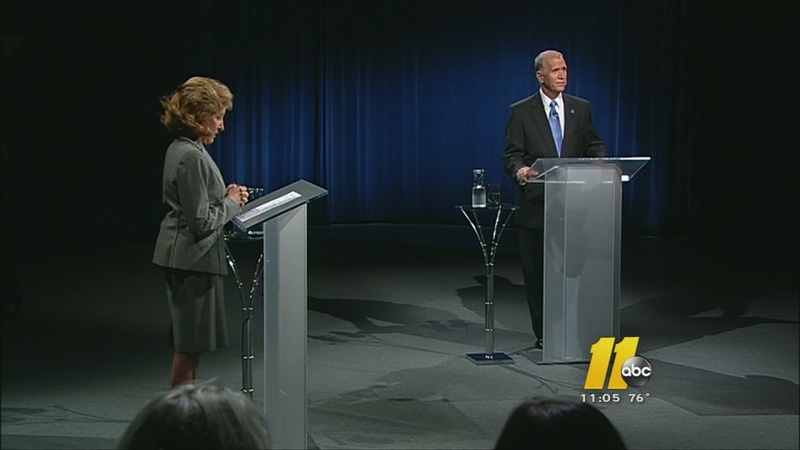 RESEARCH TRIANGLE PARK, N.C. (WTVD) -- During the first face-to-face debate between Democratic U.S. Sen. Kay Hagan and Republican challenger Thom Tillis, both repeatedly traded stinging blows -- only agreeing that they both are running for U.S. Senate.

"As your U.S. Senator I'll go to Washington and I won't be a rubber stamp for Barack Obama and Harry Reid," said Tillis in an opening statement. "I'll go there and get things done and make America great again."

Hagan countered, "Speaker Tillis feels that those who have the most should get the most help."

They were the first in a litany of attacks during the first of two debates sponsored by the North Carolina Association of Broadcasters. "CBS This Morning" anchor Norah O'Donnell moderated in front of a small audience of the candidates' closest allies. O'Donnell asked questions ranging from the militarization of local police forces following backlash in Ferguson, Mo. to immigration reform, healthcare and education.

Tillis took every opportunity to align Hagan with President Barack Obama starting out with the terror group Isis, the latest beheaded American and the president's air strikes. He blasted Obama for saying there's no strategy and Hagan for not helping.

"This is an example of where President Obama has failed the people of this country and Kay Hagan has allowed it to happen or has been silent with his inaction," Tillis asserted.

"I'm pleased we passed the V.A. Accountability bill, but when I saw secret waiting lists backlogs up to the ceiling, I took direct action. I worked in Winston Salem to help solve that issue, but I've gotten direct action for Fayetteville, N.C.," she said.

At several point Hagan accused Tillis of leading the way to harm the state's most vulnerable. She cited the Republican vote to cut unemployment insurance benefits and Medicaid expansion.

On education, she accused him of cutting $500 million, while publicly claiming to give teachers their biggest pay raise in state history.

"Every single democrat in the house chamber voted for an appropriations measure that sent a very clear message to teachers in North Carolina," Tillis defended, "You're our priority," citing the 7-percent raise, explaining that the senator's math doesn't add up.

"Senator Hagan in 2008 you said, 'someone who votes for the president 92-percent of the time doesn't work here in North Carolina', and yet since you've been in Washington you've voted with President Obama 95-percent of the time," Tillis hammered.

All eyes are on this race because of the shift it could help create for Republicans to gain control of the Senate. So far Hagan, Tillis and special interests have spent about $30 million in advertising on this race. Pollsters have it at a dead heat.

You can look for live coverage on ABC11 as well as a live stream on abc11.com.