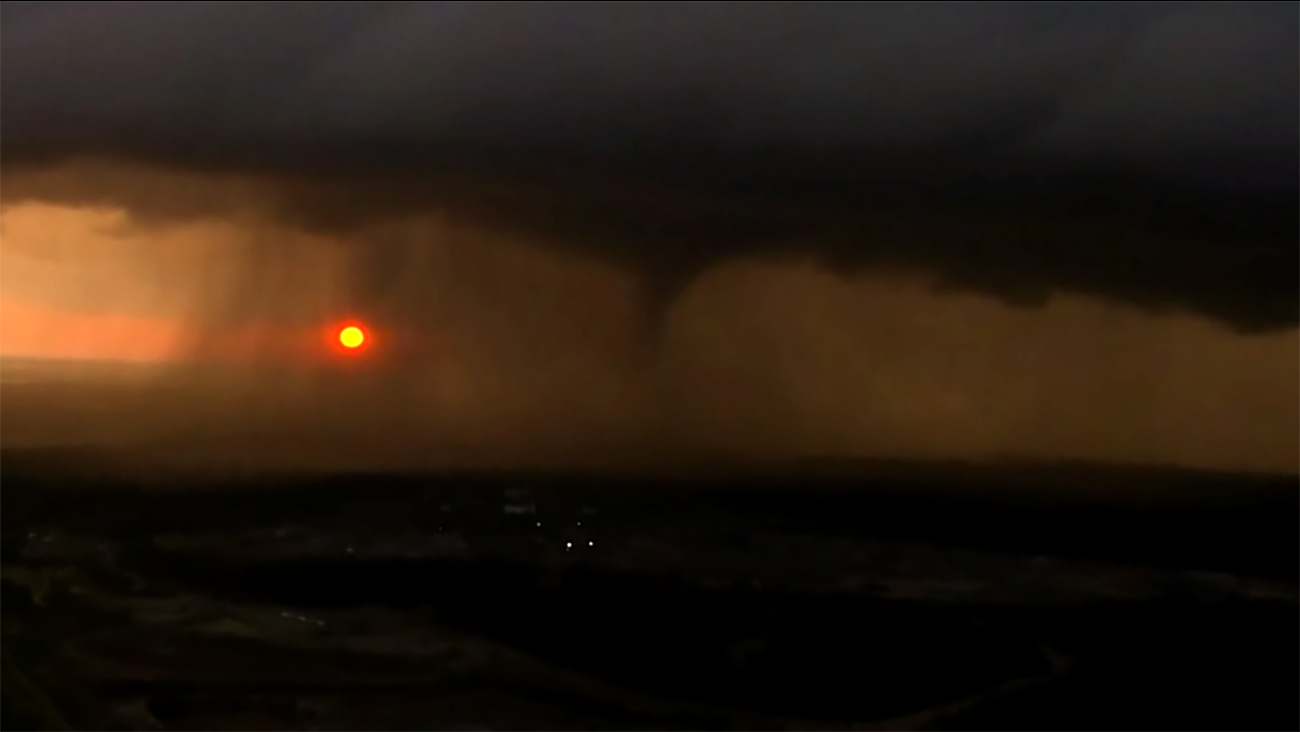 One of the tornadoes spotted in Tulsa on Wednesday.

National Weather Service meteorologist Amy Jankowski said a tornado touched down and lifted up numerous times Wednesday night as it swept through the northern Tulsa and Owasso areas.

About one square mile of a mostly residential area sustained damage, Tulsa Fire Department spokesman Stan May said. One home was destroyed and other residences and businesses sustained roof and structural damage, he said.

Police and fire officials were going door to door in the area to make sure everyone was accounted for. There were no immediate reports of anyone missing, May said.

"We want to check each house," he said. "We've got some elderly people in the area. We want to make sure people have the medicines they need."

May said a few others suffered minor injuries but declined treatment.

Nearly 5,000 Public Service Company of Oklahoma customers lost power after the storm, but the utility said service had been restored to all but about 1,000 early Thursday morning.

Nearly 9 million people in parts of Texas, Oklahoma, Louisiana and Arkansas were in an enhanced area of risk Wednesday, putting them in the bull's-eye for some of the strongest storms, the national Storm Prediction Center said earlier Wednesday.

In Louisiana, the National Weather Service issued a flash-flood watch for northern parts of the state until 7 p.m. Thursday. Forecasters say multiple rounds of strong to severe thunderstorms will produce 2 to 4 inches of rain, and perhaps 6 inches in some parts of the state.

"Heavy rain from waves of storms could renew flooding over north Louisiana," said Cynthia Palmer, a forecaster at the weather service's office in Shreveport, Louisiana.

The ground remains saturated in that part of the state, which saw record flooding earlier this month, Palmer said.

"We will see the heaviest rain in the Monroe area of northeast Louisiana starting late this afternoon and evening and another wave on Thursday," Palmer said Wednesday morning. "This is the area that could see up to 6 inches."

In northern Mississippi, forecasters said thunderstorms would bring rainfall amounts of 2 to 4 inches. A flash-flood watch was in effect through Thursday evening.

As the system moves east, strong storms were expected to develop early Thursday over Alabama, where forecasters say the main threats will be tornadoes, winds of up to 70 mph, quarter-sized hail and heavy rains.

In Georgia, forecasters said more than 4 inches of rain could fall in western parts of the state.