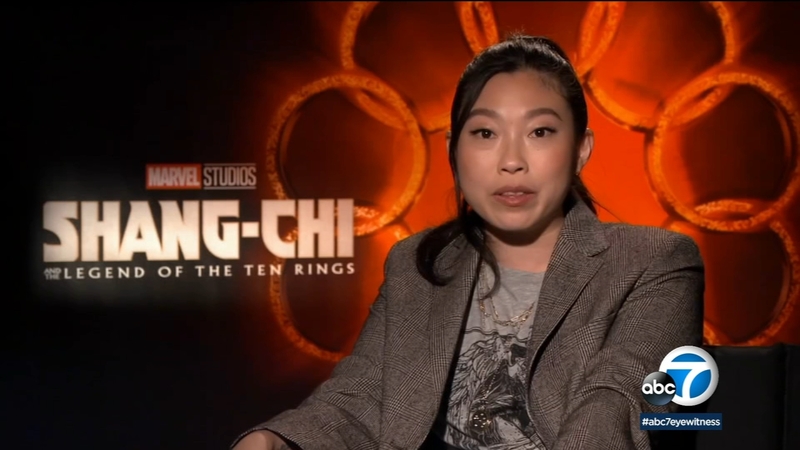 Celebrating 'Shang-Chi and the Legend of the Ten Rings'

HOLLYWOOD -- From her breakout role in "Crazy Rich Asians," to her TV series "Nora from Queens," Awkwafina has been enjoying quite a ride over the past few years. She was surprised to be drafted in to the Marvel Universe, but is so happy to be part of this world.

Simu Liu plays the title role in "Shang-Chi and the Legend of the Ten Rings." Awkwafina is his best friend, Katy, and says the importance of having an Asian hero, surrounded by an Asian cast, is something to celebrate.

"I think this movie is very significant for the AAPI community. Specifically he's the first Asian superhero and what that means to underrepresented communities is that they can see themselves reflected in Hollywood. It's really important," said Awkwafina.

Director and co-writer Destin Daniel Cretton took great care to make sure these characters were fully formed and relatable.

"For this movie it was a really exciting opportunity to shatter some of those stereotypes and surprise people with the depth and dimension we can give these characters that often come across as either mystic gurus or just silent action stars," said Cretton. "As an Asian American, I never want to contribute to any characters that are furthering stereotypes that have been perpetuated in cinema. And honestly, just as a citizen of this planet, I don't want to do that for any culture."

To help Cretton achieve his goal, he filled out his cast with veteran actors like Tony Leung, Michelle Yeoh and Sir Ben Kingsley. And he was thrilled when these legends didn't act like legends!

"I expected us to just be doing this the whole time (bows down) but they were so grounded, so kind and so gracious and surprisingly so fun. They haven't been jaded by this industry," said Cretton.

"These are actors that are so powerful, just to be in their presence, it's really crazy," said Awkwafina.