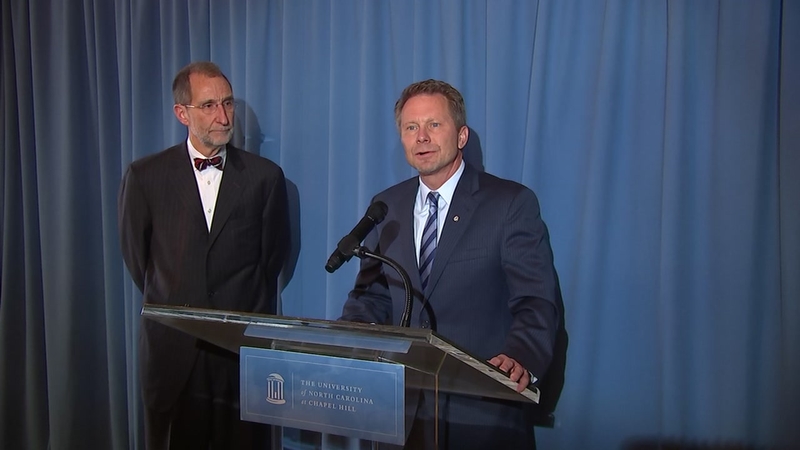 "I'm deeply honored to be asked to lead the University of North Carolina at Chapel Hill," said Guskiewicz, as he stood next to Interim UNC System President Dr. Bill Roper inside The Carolina Inn.

Dr. Guskiewicz joined the UNC faculty in 1995 and is a nationally-recognized neuroscientist best-known for his work studying sports-related concussions.

In 2016, he was named Dean of the College of Arts and Sciences, with the university touting his fundraising efforts. Since 2016, he's raised more than $400 million as part of Campaign for Carolina.

According to a university press release, Guskiewicz was awarded a MacAthur Fellowship in 2011, and was recognized by Time Magazine for his research efforts in 2013.

"He further has a distinguished career of an academic leader, an innovator, a scientist, a person of stature," said Roper.

Guskiewicz takes over the role vacated by former Chancellor Carol Folt, who left at the end of January. Prior to leaving, Chancellor Folt ordered the removal of Silent Sam's base. The monument was ripped down by protesters in August, with its future placement drawing increased scrutiny by students, faculty, and alumni.

"He's on record as saying that the monument should not be anywhere on campus, it rather should be somewhere else. And that's my position as well. And I'm comfortable with his decision. It's one of the reasons that I thought he was the right person to lead UNC-Chapel Hill at this crucial time," said Roper.

Last month, Roper estimated an interim Chancellor could serve 18 months, though he hoped it would be for a shorter time period.
"I'm going to stay focused on the task at hand over the next several months. I'm thrilled to be leading the university right now. I'm confident we'll be doing the right things that I hope would allow me to be a candidate in that search," replied Guskiewicz, when asked about his interest in the permanent position.

Guskiewicz explained he would spend the beginning part of his tenure meeting with the university community.

"I'm going to spend a good part of my first two or three months as part of a listening and learning tour, and while I've been here for nearly 24 years, I still have a lot to learn," said Guskiewicz.

Not everyone on campus was supportive of Dr. Guskiewicz being named to the role.

Calvin Deutschbein, a graduate student, said he did not believe Dr. Guskiewicz was supportive of teaching assistants who favored withholding grades in an effort to pressure university officials to take action on Silent Sam.

He shared what he hoped Dr. Guskiewicz would do with the money raised as part of Campaign for Carolina.

"What is far more important to me is that Dr. Guskiewicz puts his money where his mouth is. End student fees," said Deutschbein. "I think we should start looking really seriously at tuition."

Guskiewicz is the Kenan Distinguished Professor of Exercise and Sport Science and co-director of the Matthew Gfeller Sport-Related Traumatic Brain Injury Research Center and director of the Center for the Study of Retired Athletes.