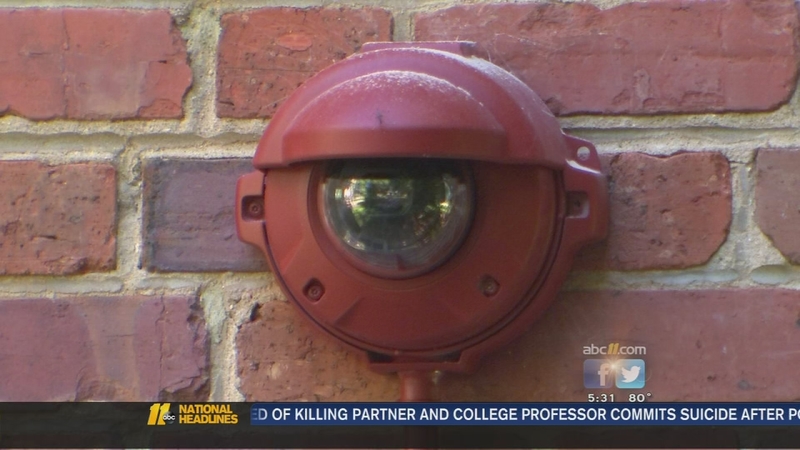 CHAPEL HILL, N.C. (WTVD) -- The Silent Sam statue on UNC Chapel Hill campus was blindfolded once again as security cameras installed by the university looked on.

The statue is Confederate memorial to the UNC students who fought in the Civil War. A Confederate flag bandana was removed from the statue's eyes Tuesday morning. It was blindfolded in the same manner just last week.

The statue has been a target in recent months. It was spray painted with the words "Black Lives Matter," and "Murder" in July, and "Who Is Sandra Bland?" in August.

Security cameras have been keeping watch over the statue since July, according to UNC's Department of Public Safety.

The department's information officer, Randy Young, said the cameras were installed by building services after the statue was first spray painted.

Young said the campus police don't have video of when the statue was spray painted for the second time due to a network interruption. There is video of the blindfolding incidents, but he said they are not investigating those acts as they're not considered vandalism.

He said the Department of Public Safety hopes the cameras will primarily act as a preventative measure, deterring future acts of vandalism. He added that the department will use them as an investigative tool should any more vandalism occur.

The University of North Carolina said gave this statement:

We respect the passionate opinions many have on the issues of race and place at Carolina, and we also understand the need to freely express those points of view. However, we believe there are more productive ways of engaging, such as the Carolina Conversations sessions and other events that bring people together to discuss important issues.

Here are more pictures and video of the previous times the statue has been targeted:

Silent Sam blindfolded with a Confederate flag for the second time in two weeks pic.twitter.com/ZptiHffDM9