Wake County students could be going to school on Good Friday, 2 Saturdays to make up for snow days 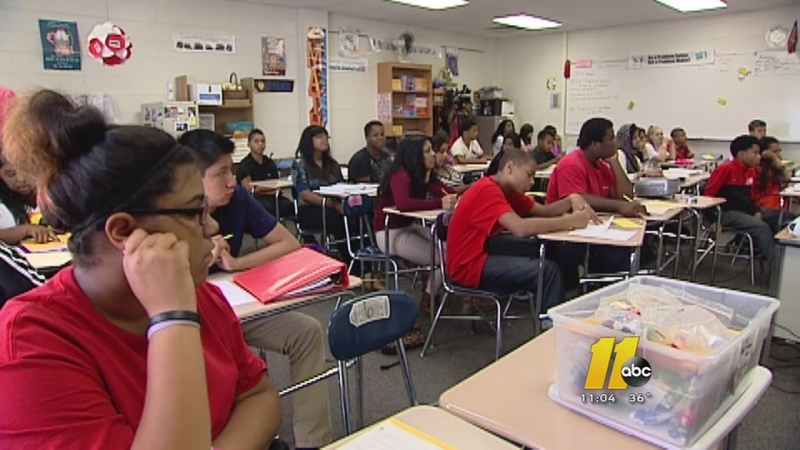 CARY, N.C. (WTVD) -- Wake County School Board members are one step closer to finalizing the final school make up days from last week's winter weather that closed down school for most of the week.

When board members left their Cary headquarters Tuesday night, they left with a push to open school on Good Friday and two Saturdays, one in April and another in May. Those dates will be released later this week.

They know this plan won't make everyone happy.

"Whatever day we pick there's going to be some conflict. So we're looking for the least disruptive solution," said Board Chair Christine Kushner. "I think it's become clear that we have very few options."

WCPSS staff say they had to consider options for a student body 155,000 strong, on nine calendars.

Making up Tuesday, Feb. 24 was not in the equation Tuesday night because school was canceled that day after buses were already on the road, but covering Wednesday through Friday had staff pouring over options.

Spring Break was briefly discussed but the one week notice to parents was not ideal.

Adding 15 to 20 minutes to each school day from now until the end of the school year also posed its own concern.

"Making high schools start earlier, and our high schools already start early in Wake County, and our elementary schools get out late, I think that's something that would be difficult on an everyday basis for parents," said Kushner.

There was also pushback from taking away teacher workdays.

"We've got some sensitivity also to taking some of the work days that teachers have to close out the school year as well. We did that last year and received a lot of feedback around what a hardship that was," said Cathy Moore, the Deputy Superintendent of School Performance for Wake County Schools.

And as far as extending the school year, there was a concern that testing schedules have been set as well as graduation dates that cannot be changed due to venue issues.

Overall, Kushner said many parents had emailed her in support of Saturday options. At the end of the evening, the board was in support of scheduling two Saturdays and Good Friday, knowing this still will not be ideal for everyone.

Looking forward, Kushner said she is in talks with state leaders about getting local control over the school calendars so they can better plan for future make-up days while fulfilling all the school hours required by law.

In the Durham Public School System, students in a traditional calendar school will no longer have early release days on March 11 and April 29. They will also have to attend classes on March 27, June 10, and June 11.

Other missed days will not have to be made up due to banked time or other factors.

Click here to see the complete make-up day list for all school calendars in the Durham Public School System.

School leaders have released their make-up schedule for the four days missed.

For traditional calendar schools in Cumberland County, Wednesday, June 10 is now a full day. Thursday, June 11 is now the last day of school.

For year round calendar schools, Friday, June 5 is a full day and Monday, June 8 is now the last day of school.