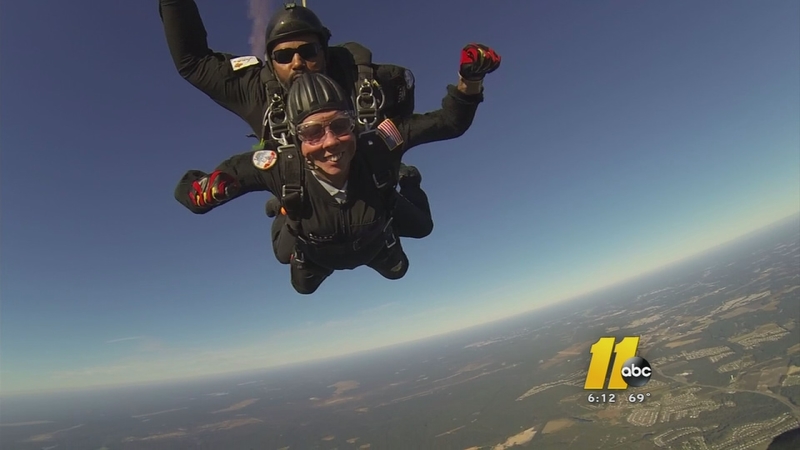 RAEFORD, N.C. (WTVD) -- The statistics don't scare her. From 14,000 feet above ground, headed down at 250 miles per hour, Jeannette "Jan" Kirkpatrick's got the will, the courage and the spunk.

After all, what's a simple skydive when you've got 90 years' worth of life experiences?

It's not a death sentence, she promised.

"Oh, I have lots of friends waiting (for us) to call and tell them we're having a funeral," Kirkpatrick laughed." I said 'Well if I die dropping, you can just have a funeral while everybody's here."

On Wednesday, the Rockingham woman and World War II nurse traveled to Raeford alongside her family and a few friends to jump out of a perfectly good airplane with the All Veteran Parachute Team. It comes a day after her 90th birthday.

Kirkpatrick gets a pre-jump briefing.

The jump took place on the Paracleet XP grounds of the PK Airpark at Raeford Municipal Airport, where Kirkpatrick had watched her children jump in years past.

"She said 'I think that'd be wonderful,'" recalled her daughter, Lisa Swan Wright. "So we're jumping from an airplane today."

The ride over to the plane.

Before that jump with the parachute team, Wright and her 23-year-old granddaughter, Erin Mauss Kirkpatrick had to look right and pretty. Her first order of business was to have her daughter Lynn help her apply a hot pink Maybelline Superstay lipgloss.

Kirkpatrick gets her lipstick touched up before the jump.

"She will be so upset if I let her get on (TV) without it," Mauss said, carefully smoothing the gloss to her mother's lips.

The adventurous mother of three and grandmother of six attended the U.S. Cadet Nurse Corps at the age of 18. WWII was winding down, so rather than deploying, she and her classmates ended up treating troops as they came home to South Carolina.

"We had no anesthesia except ether," she recalled. "We had no plastic. We had no penicillin. Sulfa drugs came out during the war. Anything we used in surgery we used over and over again, because we didn't throw anything away. It's an entirely different world."

"Words cannot even describe what I'm sensing right now," smiled Mike Elliott, President of the All Veteran Parachute Group - a 26-year Army veteran and a former member of the elite Golden Knights. "As I've told her I've jumped with a lot of veterans of World War II. I was in France two years ago for the 70th anniversary. Today it just puts the icing on the cake."

The group decided to save the birthday cake until after the jump, but Elliott walked Kirkpatrick through a training session and change into her gear. 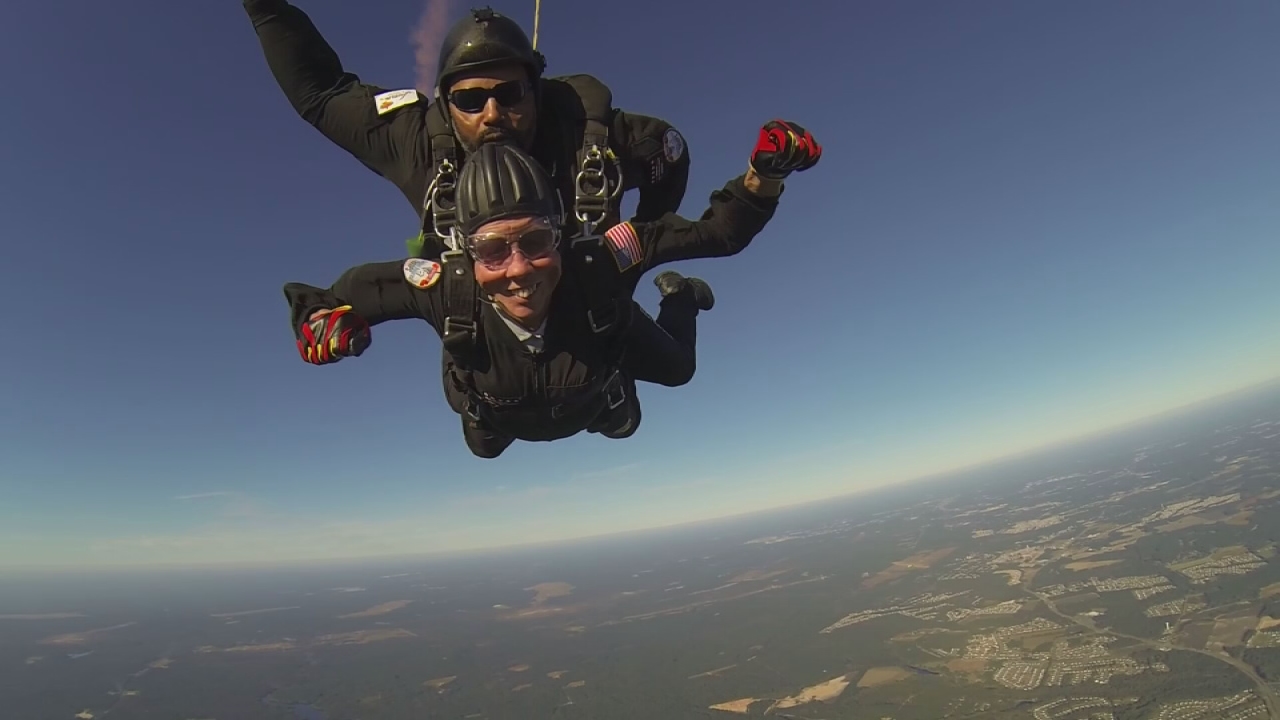 "She's got the red, white, and blue parachute!" another family member yelled.

"I didn't hold my legs the way you told me to," Kirkpatrick laughed, as she and Elliott made a smooth landing.

"It was great!" Kirkpatrick exclaimed.

"Something you'd might want to do again?" the videographer asked.

A hug after a safe landing.

"Now we have to figure out what to do for her 100th birthday," Kirkpatrick's granddaughter, Erin laughed.

For more information on the All Veterans Parachute Team, click here: http://www.allveterangroup.com/