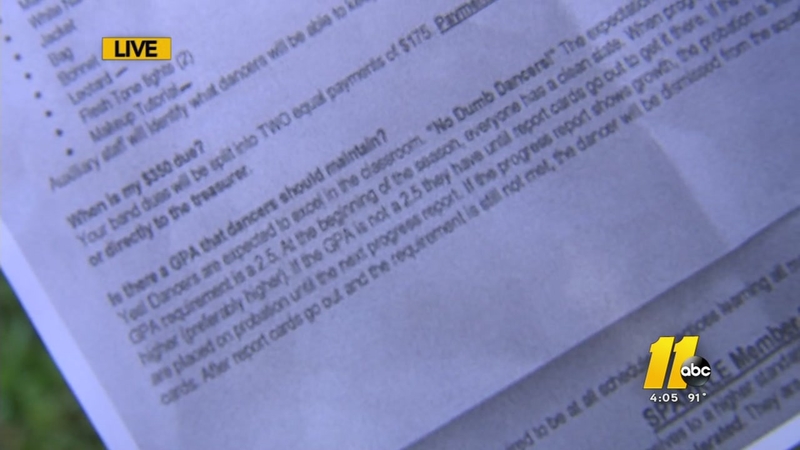 DURHAM, N.C. (WTVD) -- A Durham school leader is apologizing after a flyer was posted for the band program stating in bold letters that "No Dumb Dancers" would be accepted.

A Durham High School band director is apologizing after a flyer was sent out, saying in bold letters, “No Dumb Dancers” can be apart of team & members are expected to make A’s and B’s. A Mom reached out to furious. She argues not all kids make Honor Roll. #ABC11 pic.twitter.com/CLJmolKJcb

The flyer said "dancers are expected to excel in the classroom" and "the expectation is for all members to make the A or A/B Honor. The message then says that there's a 2.5 GPA requirement.

"It's ridiculous. It belittles kids and talks down to them, " said Hillside parent Lakychia Myers. "Not everyone is on the Honor Roll. Kids have different educational levels."

The Durham School District said the message was sent by an adult volunteer leader with the Hillside Band and the school's band director was generally aware of the content.

ABC11 brought the flyer to the district's attention and a school leader has since apologized.

"The principal reports that the band director apologized for the tone of the message during a band meeting," said DOS Spokesperson Chip Sudderth. " While Hillside High prides itself on high academic standards for students in extracurricular organizations, communicating to students with respect is also a core Hillside value."