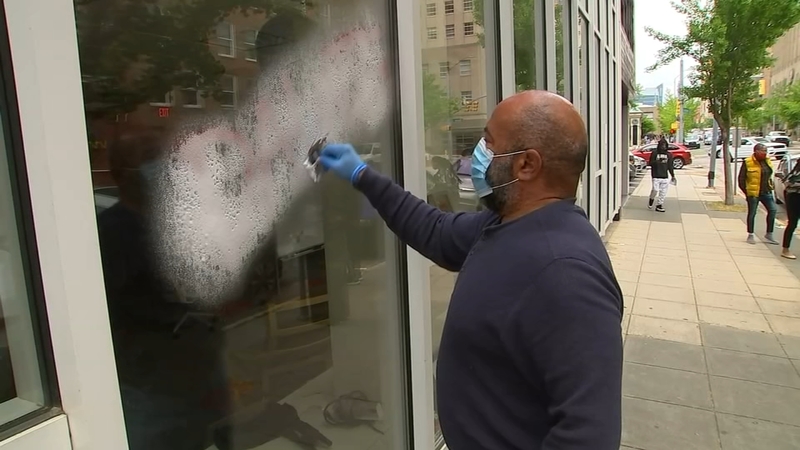 Vigil and protest ends with vandalism in Raleigh

RALEIGH (WTVD) -- After two days of peaceful demonstrations in downtown Raleigh, some protesters Sunday night threw eggs at buildings, threw objects at police cars and damaged the windows of a retail store.

Sunday night's demonstrations started with a vigil in Moore Square.

Demonstrators around the country have demanded justice for the families and police reform.

At 8:16 p.m., Raleigh Police Department declared the demonstration "an unlawful assembly due to protestors damaging property and impeding the flow of traffic," according to the department's Twitter account.

ABC11 crews at the scene witnessed demonstrators throw eggs at buildings and damage windows at Urban Outfitters on Martin Street.

Police warned demonstrators to move to the sidewalk because they were marching in the street and blocking traffic.

RPD arrested 12 people. All were charged with Failure to Disperse.

Raleigh's gatherings have been in line with those near Minneapolis and Chicago over the police shooting deaths of 20-year-old Daunte Wright and 13-year-old Adam Toledo. The demonstrators have demanded justice for the families and police reform.

Those police killings came during the trial of former Minneapolis Police Officer Derek Chauvin in the death last year of George Floyd.

.@raleighpolice warning demonstrators to move to the sidewalk because they are in violation of marching in the street. Group is ignoring the call. We are on Fayetteville Street. @ABC11_WTVD pic.twitter.com/cB975ZOu16

Dr. Mehul Mankad answers questions about the emotional impact of police shootings on the community.