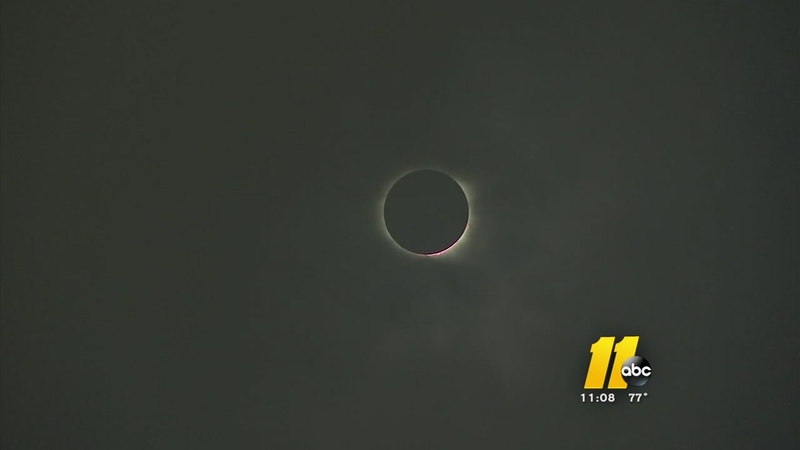 The path of totality - where day briefly becomes night - passed over Oregon, made its way through the heartland, ending off the coast of Charleston, South Carolina.

While most of North Carolina was not directly in the path of totality (except for some westernmost counties), we were treated to a partial eclipse here in the Triangle.

In Raleigh, the maximum coverage occurred around 2:44 p.m.

The last time a total solar eclipse swept the whole width of the U.S. was in 1918.

ABC11 had coverage from all over the eclipse viewing areas where thousands of people gathered to view the "Great American Eclipse."

Thousands of students, faculty, family, and friends gathered outside on the Brickyard at NC State University, all marveling at the rare occurrence of the solar eclipse.

The Eclipse Day Celebration, hosted by the School of Sciences, was full of activities including make-your-own pinpoint projectors, a mini weather tower, physics demonstrations and more.

"This gives you a really cool feeling to know where you are in the galaxy," said Pace University student, Sager-Leonard.

"We wanted to be a part of history," Thomas Richardson told ABC11. Richardson brought along his three sons to view the eclipse. "I want them to experience this because it's an amazing thing."

Thousands came out to Morehead Planetarium to take part in their 2017 Carolina's Solar Eclipse Party. There were lots of hands-on activities, including making your own indirect eclipse viewer made out of a cereal box.

People of all ages showed up for the fun, including Aurora and Will Grubbs from Raleigh who dresses up as Martians. Will said, "It's so exciting because it's been 36 years and I've never seen a solar eclipse. I've never seen it.

His mom Aurora added, "Last time I was a baby so this is the first time I'm seeing the solar eclipse as a family, so as Martians we've got to enjoy it."

He skipped school today and dressed as green 👽 to catch the eclipse at the @moreheadplanet. #ABC11 #Eclipse2017 pic.twitter.com/fJn7NPGnG6

Folks witnessed the solar eclipse in Charleston in dramatic fashion. A storm was rolling through, with thunder and lightning, just as the moon aligned with the sun.

"It's kind of a once in a lifetime experience," said observer Riley Delk. "You don't get to see something like that, total darkness."

Charleston was the last place in America to watch the eclipse and totality was much shorter than in other parts of the country.

Schools throughout Charleston County, as well as some businesses, were closed for the event. State officials estimated over 2 million people traveled to town for the event.

RELATED: WHEN WILL THE NEXT SOLAR ECLIPSE BE?