Many hurricane victims in Fayetteville moving back home, but some still wait for relief -- from Matthew 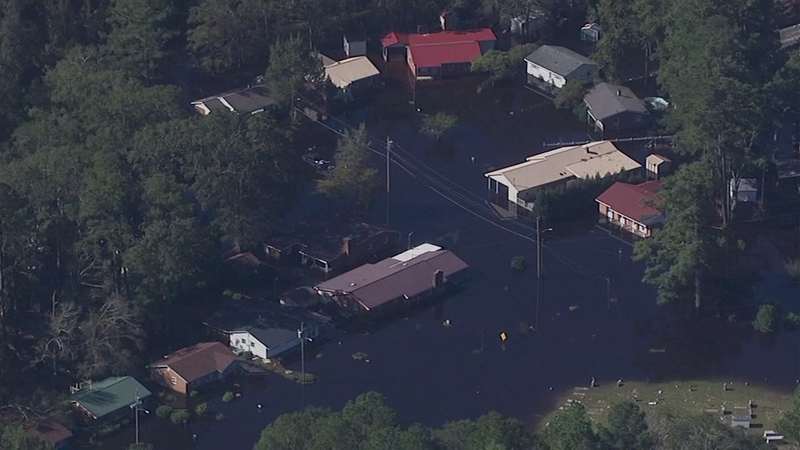 Some Fayetteville hurricane victims still wait for relief -- from Matthew

FAYETTEVILLE, N.C. (WTVD) -- Days after Hurricane Florence, Chauncey Payne posted a sign on his front porch declaring "God Did It." But six months later, it was Chauncey's herculean efforts that led to his home's resurrection.

"Well I would say Chauncey did it, but it was Chauncey through God," Payne quipped to ABC11. "I still give Him the praise."

The Payne's home in Fayetteville was stripped down to its studs -- again -- a process they knew well after the flooding brought by Hurricane Matthew.

"If I can get the kitchen and bedroom done, I can live in this house again and work with what's left with whatever money I got," he told ABC11 in October 2017.

Over Thanksgiving, the kitchen was a work in progress, but now a month before Easter every room is done -- and the Paynes are home hosting barbecues and sleepovers with their grandchildren. They received more than $13,000 from FEMA.

"I had to budget, plan and execute what I needed to do in order for it to come out right," Chauncey said. "Even though you might be down, you're never out. You just have to have faith."

Officially, the City of Fayetteville counts 740 homes in Fayetteville sustaining significant damage from Hurricane Florence, plus a dozen or so businesses.

Statewide, North Carolina suffered an estimated $17 billion in damages from Hurricane Florence, and in six months both state and federal governments have allocated more than $1.2 billion in relief and recovery.

While families like the Paynes celebrate their homecoming, though, other Fayetteville homeowners are moving in with continued trepidation and impatience for government assistance.

The rollout of one specific relief program, the Community Development Block Grant - Disaster Recovery (CDBG-DR), has been moving at a glacial pace, and families affected by 2016's Hurricane Matthew are the ones still waiting.

"I think all of this area needs to be changed into something else," Philomena Cheruiyot, whose home on Louise Circle flooded in both Matthew and Florence, tells ABC11. "It's not good to live around here."

Administered by the U.S. Department of Housing and Urban Development (HUD), CDBG-DR grants are earmarked specifically by the U.S. Congress. Officials from HUD then identify the hardest hit areas, then works with state and local governments on the best uses for them, including hazard mitigation, rebuilding infrastructure or building new affordable housing.

After Hurricane Matthew, Congress allocated some $236 million for CDBG-DR in North Carolina -- only $10 million has been distributed to hurricane victims.

Michael Sprayberry, Director of NC Emergency Management, tells ABC11 that CDBG-DR grants are meant to be a "last resort" for hurricane relief, but he says he understands victims' mounting frustrations waiting for those grants.

"When we received our first allocation, which was back in August of 2017, we didn't have a full staff to manage it," he said. "We didn't have a trained staff to manage it. We're moving faster and we're in a spot now to when we receive additional funding from HUD we'll have a structure where that funding can drop into and we'll know what we'll need to do because we'll have a staff on board."

Sprayberry said that CDBG-DR funds also have to meet stricter regulations, which include the state presenting a full plan which must be approved by a federal register: 80 percent of the funds must be spent in the four "Most Impacted and Distressed" counties (defined by HUD as Wayne, Robeson, Cumberland and Edgecombe) and, further, 70 percent of the funds must be expended on persons who are defined as low- and moderate-income.

Additionally, officials say North Carolina has not received all of the CDBG-DR funding for Hurricane Matthew; the State was notified that it would be receiving $168 million for mitigation funding early in 2018, but it hasn't been deposited.

"Believe me, I go out every day, I talk to people in the field," Sprayberry said. "We see it, we know it, we live it."
Report a correction or typo
Related topics:
fayettevilleiteami teamhurricane florencehurricane matthewhurricane
Copyright © 2021 WTVD-TV. All Rights Reserved.
I-TEAM
Less than half of violent crimes lead to an arrest
'El Chapo' Guzman's wife sentenced to US prison
Tips to avoid holiday social media scams
Why you may be unintentionally paying more at the pump
TOP STORIES
Friends mourn loss of Rolesville teen killed in hit and run
Crumbley parents plead not guilty to Oxford school shooting charges
CNN fires Chris Cuomo following suspension, investigation
TIMELINE: Events before, after MI school shooting, parents' arrest
Active shooter drill planned for UNC Hospital in Hillsborough
Passenger jumps out of plane taxiing at Phoenix airport
Show More
RPD chief hopes 'Shop with a Cop Day' helps community relations
Homeowners burn down house in attempt to get rid of snakes
Pedestrian killed on US 401 identified as Rolesville HS student
Tensions between US, Russia escalate ahead of Biden-Putin call
Money found inside megachurch walls possibly tied to 2014 theft
More TOP STORIES News