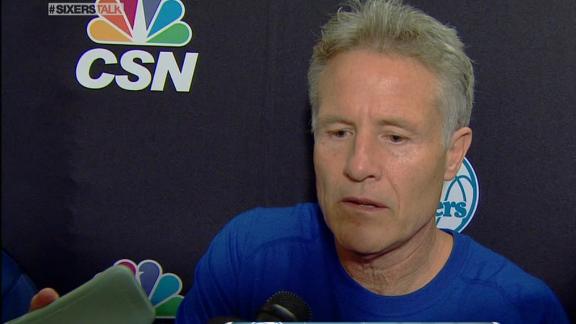 "Jahlil is a very important part of our organization and our future," the team said in a statement. "While we are disappointed with his recent actions, we have faith in him as a valued member of the Sixers. We will provide the necessary resources to support him on his journey and will do our part to help him succeed both on and off the court."

Okafor sat out Wednesday night's 99-87 loss to the New York Knicks and will miss Saturday's game against the Denver Nuggets.

The suspension came the same day a second video was releasedby TMZ showing him involved in a scuffle in Boston. The initial video from that night was posted last Thursday.

Okafor, who will turn 20 on Dec. 15, was caught on video engaging in a brawl with a man outside the nightclub in the early-morning hours last Thursday. The victim filed a report with the Boston Police Department, and police have urged any other possible victims to come forward. The videos released by TMZ appear to show two separate scuffles.

Sixers coach Brett Brown said Wednesday that Okafor's initial account of the incident to the team did not include all of the details.

"The details, the further details that came out surprise me, surprised us," Brown said before the Sixers' game against the Knicks. "As far as the play-by-play of what happened, he did not go into that. Today we learned more. And the thing I do say is that when I spent time with Jahlil in his room today, he's ashamed, he's embarrassed. And this has caught him off guard."

The fight in Boston followed an October incident in which a heckler pointed a gun at Okafor's head following a verbal exchange at a club in Philadelphia, according to a report in the Philadelphia Inquirer. The newspaper also reported Okafor was stopped by police in October for going 108 mph on a Philadelphia bridge.

"There have been mistakes that have been made, he does own it," Brown said Wednesday in discussing the suspension. "And nobody is proud of this right now. So we will support him, he is ours and we will move on. Nobody is taking this anything else but extremely serious."

On Tuesday, CSNPhilly.com cited two sources as saying Okafor presented a fake identification card at Misconduct Tavern in Philadelphia in another October incident. He was not served, according to the sources.

A representative for Okafor denied that he used a fake ID. "He doesn't have a fake ID. It never happened," the person said, according to TMZ.com.

Okafor's handlers have asked the 76ers to make a security guard available for Okafor going forward. The Sixers did not return a phone call seeking comment, but two sources told ESPN's Chris Broussard the team will honor the request.

Okafor, who leads all NBA rookies at 17.5 points per game, took responsibility for his recent behavior in a series of tweets Sunday. Those close to Okafor have let him know in no uncertain terms that he cannot keep putting himself in positions where negative things can occur.

"We're all over him," one person said. "It's tough love and support. We're telling him he has to learn from these things."

Mike Krzyzewski, who coached Okafor for one season at Duke, came to his former player's defense following the Blue Devils' game against Indiana on Wednesday night.

"Jah is one of the greatest kids ever. Ever, ever, ever, ever," Krzyzewski said. "He did a couple of stupid things, and so knock him for it. Suspend him, but let's move on. Make him learn from it, but don't characterize him based on that."

Brown acknowledged the Sixers could have handled things differently with Okafor in light of Wednesday's news .

"Maybe. I think everybody now steps back and looks at what we have to do better," Brown said. "This isn't a typical NBA program. The infrastructure that we have in place is highly professional. It is accountable. Could further things have been done? Sure. This is my third year with the club. We have not had an incident like this."

Brown was asked if he felt betrayed by Okafor because of the repetitive nature of recent incidents involving him.

"I don't," Brown said. "I feel like I'm looking at a 19-year-old kid that all of a sudden has come into money and has been used to winning, has been used to being in the limelight. And all of a sudden you have that 19-year-old freedom of being an NBA player and travel around to different cities, that things like this can happen. I think because of the repetitive nature that it's happened to Jahlil, we take it very seriously, and I do not feel betrayed.

"Jahlil works extremely hard and is a great teammate in the environment that I see him the most," Brown said. "I worry from an adult standpoint for him to help him navigate through this NBA lifestyle."

Information from ESPN's Ian Begley, Dana O'Neil and Chris Broussard and The Associated Press was used in this report.

Stein: Okafor should have had security after first incident
ESPN.com senior NBA writer Marc Stein discusses the timing of Jahlil Okafor's for two-game suspension by the 76ers, the same day a second video was released of Okafor's fight outside a Boston nightclub last week.