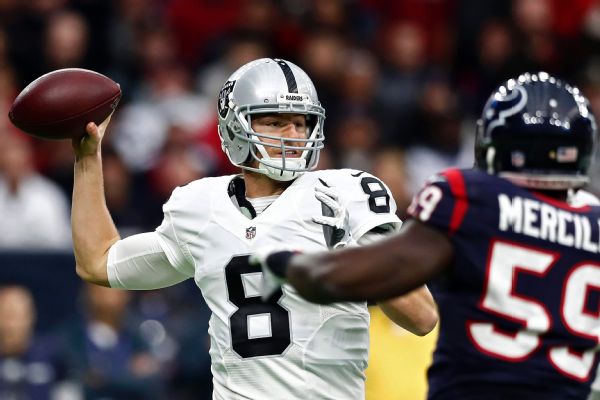 Del Rio said his coaching staff essentially talked him out of it.

"The coaches really felt like there were other things that were kind of contributing [to Cook's struggles], that it wasn't going to be a big change based on changing the quarterbacks," Del Rio said. "So we stayed the course with it. I know [Cook] got a lot of experience in the last game, the last game-and-a-half. He did some good things, and then he did some things that he can certainly learn from."

Cook, who became the only quarterback in the Super Bowl era to make his first career start in the playoffs, was just 4-of-14 passing for 41 yards with an interception before halftime. He finished 18-of-45 for 161 yards with one TD and three interceptions for a passer rating of 30.0 in Oakland's first playoff game in 14 years.

The Raiders lost league MVP candidate Derek Carr to a broken right fibula in the fourth quarter of their Week 16 game against the Indianapolis Colts. As Oakland's third-string quarterback, Cook had not dressed for a game until the regular-season finale, a loss to the Broncos. He was pressed into action before halftime in Denver when McGloin injured his left (non-throwing) shoulder.

Although McGloin's health was never specifically addressed by Del Rio after Saturday's loss, the QB was seen holding his left elbow at his side in an awkward manner whenever he threw the ball during pregame warm-ups.

Asked whether he lobbied coaches to enter the game, McGloin told reporters: "It's not my decision. It doesn't really matter what I do, what I think."

McGloin did say he hoped to go in, but he also complimented the Raiders' athletic training staff.

Cook, meanwhile, was named the starter this week, just before Pro Bowl left tackle Donald Penn was ruled out with a knee injury suffered against the Broncos.

"I [was] pressured a little bit, and it got to me sometimes, but it falls on me," said Cook, the fourth-round pick out of Michigan State who was sacked three times Saturday. "There were one or two where I held onto the ball too long, and I just need to get it out of my hands and to the backs, check it down, stuff that I can improve on."

According to ESPN Stats & Information, Cook was blitzed 14 times by the Texans, and he completed just five passes with two interceptions in those situations. When targeting Amari Cooper, he was just 2-for-10 for 10 yards and no first downs. Six of those 10 passes were defended (four) or intercepted (one), and one was a potential interception that was dropped. Cook was also 0-for-5 with a pick targeting Cooper on passes traveling at least 15 yards downfield.

In fact, Cook had more interceptions (two) than completions (one) on passes that went at least 15 yards downfield. He was 1-of-14 for 20 yards on deep passes, the most such attempts with one or fewer completions by a QB in a playoff game in the past 10 seasons.

Did inexperience serve as a factor for Cook?

"I think, sometimes, I just tried to do a little too much out there at times. I have high expectations for myself, and to come in here and play like that is not a good feeling. I want to give my team a better chance to come out and win. But it's a learning experience, and we just have to move on."

Cook was asked what he learned.

"To be more accurate, obviously," he said with a laugh. "Don't sail it over guys' heads and throw interceptions. Get rid of the ball quicker, and use my check downs."

Although Carr is expected to make a full recovery, Cook could be his full-time backup next season, as McGloin is scheduled to be an unrestricted free agent.

Carr tweeted after the defeat: