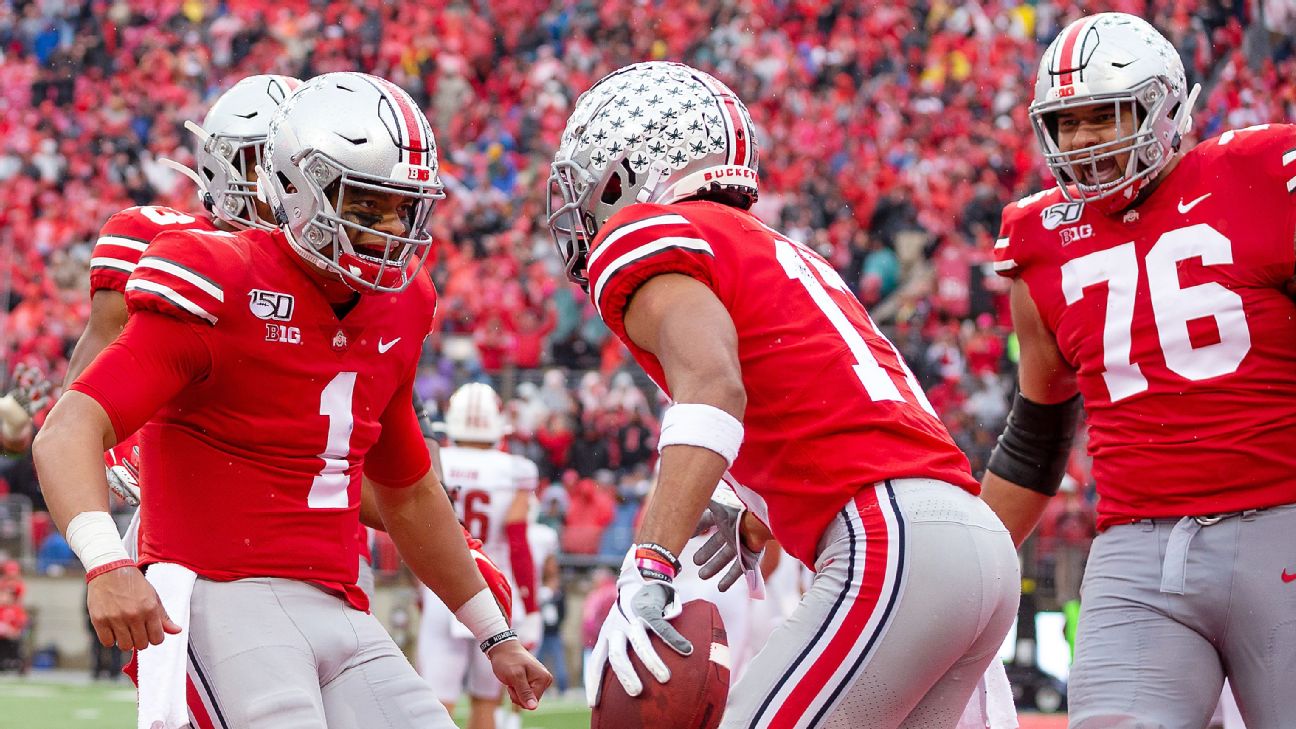 There was a time, believe it or not, when college football was not a duopoly, a kingdom ruled by Alabama and Clemson, with 128 other teams left to pick up the scraps. It's ancient history, really. It was way back in 2014, when the playoff was in its infancy, a mere six "Fast and Furious" movies had been made and Baby Shark was just a glint in Left Shark's eye. It was a time when "Clemsoning" was a pejorative and Nick Saban didn't have quite enough bling to make a Geico commercial. We were all so young and naive.

Forgive us, though, if we still have a hint of that naveté after Saturday's games. Sure, we know how this season will probably end, with Clemson (big winners over Boston College on Saturday) and Alabama (dominant even without Tua Tagovailoa against Arkansas) playing for another championship. But Saturday also left us room to dream of a different future, of escaping this "Groundhog Day" and emerging into a brave new world where the playoff actually includes four teams capable of winning it all and the straight line pointing to another Bama-Clemson showdown suddenly veers in a new direction.

Just look at how Ohio State dominated Wisconsin's once unyielding defense Saturday. Rain battered the field, but it did nothing to slow down the Buckeyes' offense. Justin Fields looked like a poised veteran. The Buckeyes' running game that was stagnant last season was ferocious, led by J.K. Dobbins' 163 yards and two scores. There's a case to be made that no player impacts a game as much as Ohio State's Chase Young, who had four sacks and forced two fumbles, as the Buckeyes held Jonathan Taylor to only 52 yards, one of the worst games of his brilliant career. Surely this Ohio State team is good enough to challenge for a title, right?

Or dig into LSU's latest big win. The Tigers have already knocked off three top-10 teams, and even if Texas no longer looks like a showstopper, and Florida and Auburn won't present the same challenge as the Crimson Tide, the sheer volume of big wins has to mean something, right? Joe Burrow tossed his 30th touchdown of the season Saturday. The only other SEC quarterback to do that through eight games was Kentucky's Tim Couch in 1997, according to ESPN Stats & Information research. Perhaps there was room for worry about that LSU defense, which hadn't always looked sharp this season. No matter. The DBs at DBU utterly confounded Bo Nix on Saturday. The freshman QB was just 4-of-19 with a pick on throws of five yards or more. Surely this LSU team has the firepower to end Alabama's SEC supremacy, right?

And just think of the storylines. Ed Orgeron, having proved the world wrong, now on the brink of bringing his beloved LSU to the promised land. Ryan Day, in his first year replacing Urban Meyer, becoming the first coach not named Saban or Swinney to win it all since ... Urban Meyer. Oh, and then there's Burrow, the guy who wasn't good enough for the Buckeyes, potentially getting a chance to prove his old team wrong. That might make for a slightly more interesting few weeks of coverage than a shot-for-shot remake of Swinney vs. Saban.

Of course, we might've once thought Oklahoma would wedge its way into the class of elite teams, too. It wasn't that long ago that the Sooners' D drubbed Texas in what was supposed to be a turning point, and the Jalen Hurts redemption arc was the storyline du jour.

That ended Saturday in Manhattan, Kansas, as unlikely a setting for the Oklahoma dream to die as any (well, except maybe Lawrence, Kansas).

What then, was Saturday's lesson? Did you watch Ohio State and LSU and think there might finally be new residents at the top of the college football mountain? Or did you watch Oklahoma join the likes of Georgia and Wisconsin on the losing end of a stunning upset and think it's only a matter of time for the Buckeyes and Tigers, too?

We're two weeks from the first College Football Playoff rankings. There are seven unbeaten teams remaining in the Power 5. That's the most at this point in the season since 2015, the year the Clemson-Alabama dynasty began. To no one's surprise, Alabama and Clemson are back once more.

So maybe we're grasping at straws here. Maybe LSU and Ohio State and Penn State and (sure, why not) Minnesota or Baylor will simply join the ranks of 2014 Mississippi State and 2015 Iowa and 2017 Miami. Cue Sonny & Cher, and don't forget your booties -- it's Groundhog Day all over again.

Or maybe this season is different. It's Week 9, after all. A fan can dream, right?

Joe Burrow cemented his spot at the top with a solid game against Auburn's stout defense Saturday, but there's a new name making his way toward the top of the rankings.

It wasn't his typical offensive fireworks, but Burrow completed 32 of 42 passes for 321 yards against one of the toughest defensive fronts in the country. That's enough to stay No. 1.

He hasn't been listed on the board at Caesars all season, but that should change. Young was dominant against Wisconsin on Saturday -- he recorded six tackles (five for a loss), four sacks and forced two fumbles. He's quite possibly the best all-around player in college football.

He didn't play Saturday as he is recovering from an ankle injury. The bigger question is whether he can get back for the game against LSU on Nov. 9. Without that, it's going to be hard to win the Heisman -- or for Bama to beat the Tigers.

Two players from the Buckeyes? It's hard to argue with either performance. His line -- 12-of-22 for 167 yards and two TD passes -- won't wow anyone, but given that it came in dreadful conditions against one of the country's better defenses offers more evidence that Fields belongs on the short list of best QBs in the country.

He accounted for four touchdowns and nearly 500 yards, but it wasn't enough to keep Oklahoma's playoff chances from being put on life support.

Any hopes Notre Dame might back its way into the playoff debate came to an emphatic end Saturday with a 45-14 loss to Michigan. It was loss No. 2 on the year for the Irish -- a fate Michigan endured a week earlier -- which all but assures both teams will be watching the playoff from home. And it further shakes up the list of remaining contenders.

Seven Power 5 teams remain undefeated, but with head-to-head matchups coming in November, the list of unbeaten teams by year's end will max out at four, meaning we're close to seeing the one-loss teams scrape back into the mix. Notre Dame and Michigan won't be among them, but the door remains open for Utah and Oregon in the Pac-12, Georgia, Oklahoma and Wake Forest (all with some bad losses) and Florida (which would have a loss to LSU on its résumé).

Odds are, Indiana won't crack the top 25 this week -- the Hoosiers got zero votes following Week 8 -- but they're 6-2 and bowl eligible for the first time since 2016. The Hoosiers haven't won seven games in a season since 2007 and, should enough AP voters decide to reward them for the hot start, it would be their first time ranked since 1994 -- by far the longest stretch by any Power 5 program. That year, Indiana spent exactly one week ranked, at No. 25. How long ago was it? "Timecop" starring Jean-Claude Van Damme topped the box office, and Boyz II Men topped the charts.

Randy Edsall bonus of the week

This is not a drill: UConn won a football game. Sure, the Huskies only beat woeful UMass, but given they are soon to be independent brethren, this one's big. The great irony, however, is that after Edsall earned bonuses for all kinds of crazy caveats in UConn losses this season, he actually has it in his contract that he gets fined $12.50 for every Huskies win. Strange, strange deal.

The ACC's dysfunctional, drama-filled Coastal Division had another epic Saturday, with Miami pulling off an upset at Pitt despite mustering only 208 yards of offense. We also saw UNC hold on to top Duke in a game that involved two turnovers at the goal line in the final three minutes. None of this should come as a surprise. So far this season, there have been 13 games between Coastal teams, and eight of them have been decided by a touchdown or less. The favorites in those games are just 6-7 overall and 4-8-1 against the spread. Now if only there was an image from this weekend that truly embodied all of the hilarity and ridiculousness of the Coastal Division. Oh, thanks, Miami.

It must be the hair

Oklahoma State went on the road and picked up a big 34-27 win over Iowa State. That was Mike Gundy's ninth win over a ranked team since the start of the 2017 season. The only active coaches with more in that same span are Nick Saban, Dabo Swinney and, as of Saturday, Ed Orgeron, according to ESPN Stats & Info research.

Under-the-radar play of the week

San Jose State had won only three games in the past two years, but the Spartans are now 4-4 after Saturday's win at Army that featured one of the most acrobatic catches you'll see this season. Receiver Bailey Gaither couldn't corral the pass initially after Army's Javhari Bourdeau interfered, but as Gaither fell to his knees, he grabbed the tipped ball and managed to tap a knee before crawling out the back of the end zone.

Under-the-radar game of the week

In the FCS ranks, Villanova managed to wrestle defeat from the jaws of victory for the second straight year against Stony Brook. Villanova blew a 21-0 lead last year, and this time around, Stony Brook came back from down 35-20 with less than five minutes to play. Stony Brook scored twice in three minutes of action, pulling to within two on a touchdown with 1:32 to play -- but it failed on the conversion try. Villanova recovered the ensuing onside kick and, at that point, had a 99.9% chance to win, according to ESPN's metrics. But Nova went three-and-out, losing 20 yards in the process, and gave the ball back to Stony Brook with 21 seconds to play. The Seawolves promptly went 59 yards on five plays and booted a winning field goal.

Videos of the week

How do the Charlotte 49ers celebrate a come-from-behind 39-38 win? Flexing at a rave, apparently.

- (@CharlotteFTBL) October 27, 2019
Dabo Swinney likes to get as many players in the game as possible during a blowout, but letting his star linebacker line up as a long snapper might be a bit much.

- Michael Burns (@MikeBurnsInSC) October 27, 2019
Michigan has found its QB of the future. He's somewhere in the crowd.

We're not sure if this makes up for the last decade of Kansas football, but it's close.

How's that for an ending? pic.twitter.com/sZRYCkHoF5 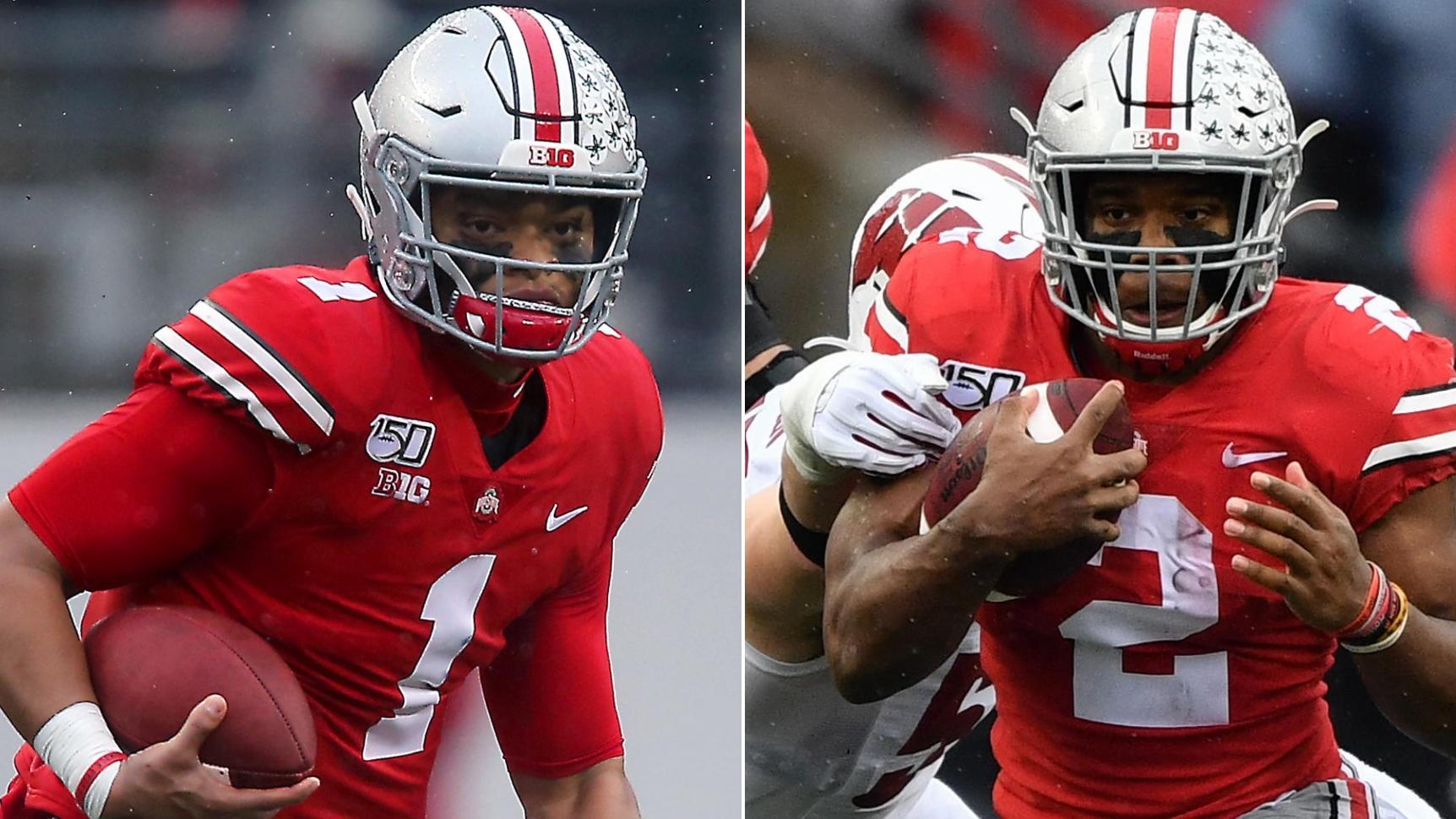 Fields, Dobbins show out in Buckeyes' win over the Badgers
Justin Fields accounts for three touchdowns while J.K. Dobbins scores twice to lead Ohio State to a dominant 38-7 win over Wisconsin. 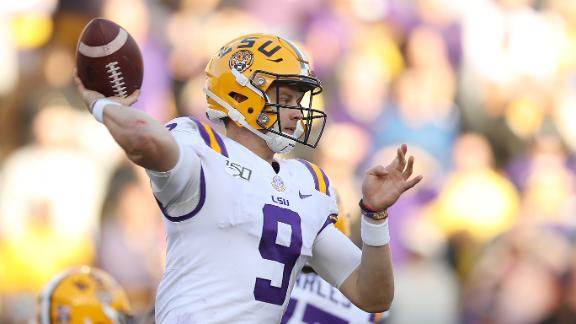 Burrow, LSU prevail over Auburn
Joe Burrow throws for 321 yards and a touchdown, and he adds another TD with a running score as No. 2 LSU holds off No. 9 Auburn 23-20. 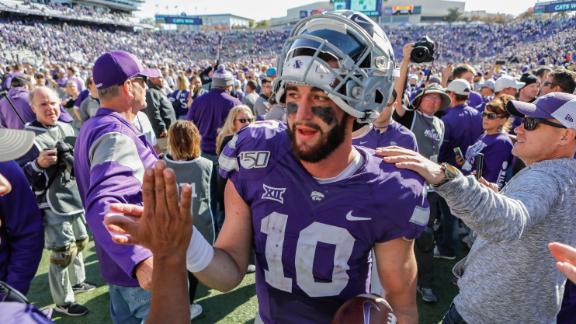 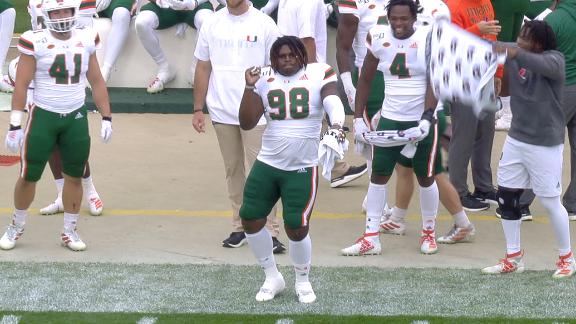 Miami DL shows off his moves after Hurricanes score
Defensive lineman Jalar Holley can't help but dance after Miami goes up 10-3 against Pittsburgh. 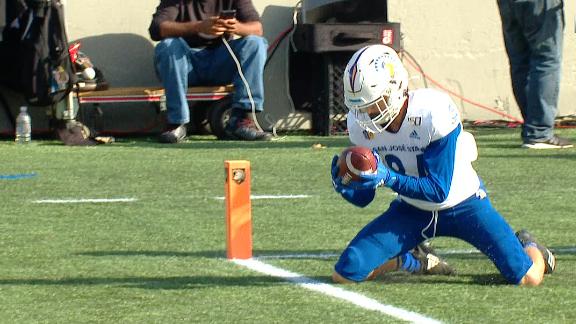 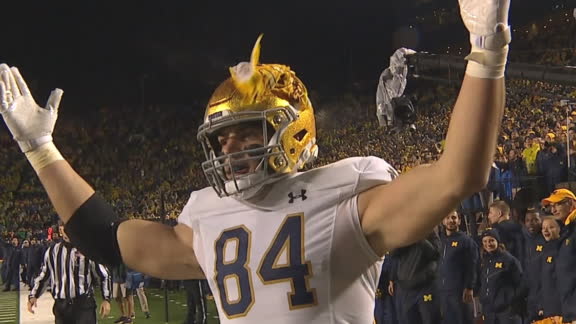