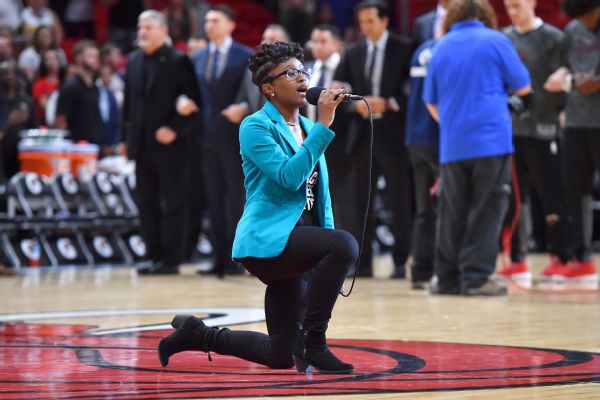 MIAMI -- A woman performing the national anthem before an NBA preseason game between the 76ers and Heat on Friday night did so while kneeling at midcourt, and she opened her jacket to show a shirt bearing the phrase "Black Lives Matter."

The singer was identified by the Miami Heat as Denasia Lawrence, who called the Black Lives Matter movement a "rallying cry" while explaining her decision to kneel in a Facebook post early Saturday.

"We're being unjustly killed and overly criminalized," Lawrence wrote. "I took the opportunity to sing and kneel to show that we belong in this country and that we have the right to respectfully protest injustices against us."

Heat players and coaches stood side by side for the anthem, with their arms linked, as has been their custom during the preseason. Many had their heads down as Lawrence sang, and the team released a statement saying it had no advance knowledge that she planned to kneel.

"We felt as a basketball team that we would do something united, so that was our focus,'' Heat coach Erik Spoelstra said. "Throughout all of this, I think the most important thing that has come out is the very poignant, thoughtful dialogue. We've had great dialogue within our walls here, and hopefully this will lead to action.''

The anthem issue has been a major topic in the sports world in recent months, starting with the decision by San Francisco 49ers quarterback Colin Kaepernick to not stand for its playing. Kaepernick cited racial injustice and police brutality among the reasons for his protest, and athletes from many sports -- and many levels, from youth all the way to professional -- have followed his lead in various ways.

"All I can say is what we've seen in multiple preseason games so far is our players standing for the national anthem," NBA commissioner Adam Silver said in New York earlier Friday, at a news conference after the league's board of governors meetings. "It would be my hope that they would continue to stand for the national anthem. I think that is the appropriate thing to do."

The NBA has a rule calling for players and coaches to stand during the anthem.

Heat guard Wayne Ellington often speaks about the need to curb gun violence, after his father was shot and killed two years ago. He had his eyes closed for most of the anthem Friday, as per his own custom, though he was aware of Lawrence's actions.

"At the end of the day, to each his own,'' Ellington said. "If she feels like that's the way she wants to stand for it, then more power to her.''

Making a statement in the manner that Lawrence did Friday is rare, but not unheard of in recent weeks.

When the Sacramento Kings played their first home preseason game earlier this month, anthem singer Leah Tysse dropped to one knee as she finished singing the song.

Tysse is white. Lawrence is black.

"I love and honor my country as deeply as anyone yet it is my responsibility as an American to speak up against injustice as it affects my fellow Americans," Tysse wrote on Facebook. "I have sung the anthem before but this time taking a knee felt like the most patriotic thing I could do. I cannot idly stand by as black people are unlawfully profiled, harassed and killed by our law enforcement over and over and without a drop of accountability."
Related topics:
sportsespnnational anthemdenasia lawrenceblack lives matterleah tyssephiladelphia 76ersmiami heatnbacolin kaepernickkneeling
Copyright © 2020 ESPN Internet Ventures. All rights reserved.
More Videos
From CNN Newsource affiliates
TOP STORIES