Anthony Davis, bolstered by 31.6 average, goes on D over teammates 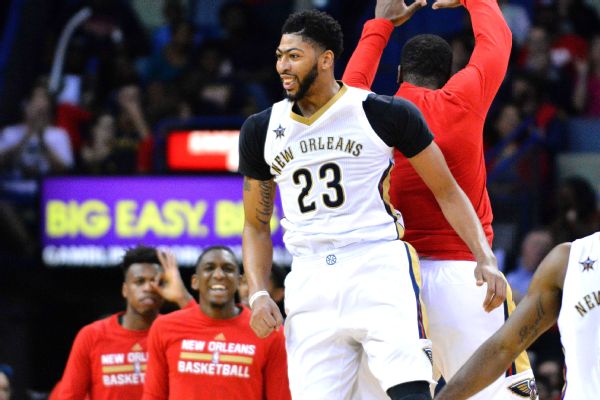 AsAnthony Davis' scoring average has soared, now to the highest mark in the NBA, so too has criticism over the lack of support he is getting from his New Orleans Pelicans teammates to make a similar rise in the Western Conference standings.

Davis, speaking to ESPN's Marc Stein on the "TrueHoop: Conversations" podcast, acknowledged that he hears talk about his current predicament but doesn't necessarily agree.

"I hear it. I see it. I'm on social media, so I see it all the time," Davis told Stein. "But I think, for me, it's just about the guys in that locker room. I know they come out here every day in practice and every night in the game and fight and leave everything on the floor. It's nothing that I try to pay attention to as much. But you see it. You have to pay attention to it.

"For me, that's not my M.O. to get into all the media and all that stuff. I just worry about what's going on in that locker room and on the floor with the guys I have in the locker room."

Davis has reached new heights in his fifth season in New Orleans. As of Monday, he leads the NBA in points (31.6) and blocks (2.8) while averaging career highs in rebounds (11.0), steals (1.8) and minutes (37.2). The 23-year-old said his ability to block out the public conversation, much like his game, has grown over the years.

"Of course, my rookie year, it's really the first time people are really, really talking about you," Anthony said. "Of course we had it at Kentucky and a little bit at high school, but when you get to the NBA and of course you're the No. 1 pick, all this media's going to be around you.

"And so when they start [saying], 'Oh, injury prone,' 'He's not a leader,' 'He can't carry [a team],' all this stuff, you start to see it. But after a while, as you get older and more established in the league and more experienced, you kind of find a way to tune it out. I think that's the point I'm at right now."

The Pelicans, who rank 12th in the West at 6-12, started the season 0-8. They won their first four games after the return of Jrue Holidaybut recently lost both ends of a two-game road streak, including a 91-81 defeat to the last-place Dallas Maverickson Sunday.

Although the Pelicans have fought their way back, Davis admitted the early struggles seemed ominous.

Although Davis' individual production has never been better, the three-time All-Star cited ball-handling and passing as the next evolution of his game.

"I watch LeBron [James], Steph [Curry], all those guys make their teammates better," he said. "They find them. EvenDraymond [Green]. He plays the same position and does the same thing, and he's able to find his teammates in a way that I can't right now. That's definitely what I want to get better at."