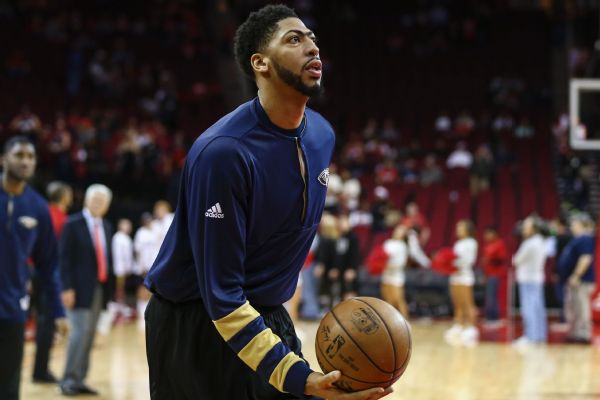 The New Orleans Pelicans star is officially listed as probable with a right thigh bruise that has sidelined him for one full game and parts of two more, including the second half of Wednesday's loss to the Oklahoma City Thunder.

The injury first occurred during a Jan. 20 loss to the Brooklyn Nets and was aggravated when Domantas Sabonis' rear bumped into Davis' right leg on a post-up attempt with 2:34 left in the second quarter Wednesday, causing Davis to hobble away from the basket while grabbing his thigh and wincing in pain. He soon left for the locker room and did not return.

It was the seventh instance in the Pelicans' past eight games that Davis has sat out at least some time because of injury, including two full missed games.

The Pelicans have shifted to a small-ball lineup over the past 14 games that features Davis logging most of his minutes at center.

Davis, recently selected to his fourth straight All-Star Game and second as a starter, reiterated Friday morning a preference for playing power forward -- "I always love playing the 4. I think that's my natural position" -- but said he isn't worried about a possible correlation to a recent uptick in missed playing time.

"We might make some adjustments. I'm not sure," he said. "I'm not worried about it. I'll be fine."

New Orleans started Terrence Jones, a power forward with the bulk to guard centers, next to Davis in the frontcourt Wednesday, moving usual starter Dante Cunningham to a reserve role.

After a game of playing center, Davis said, "If I play a full game, I don't feel physically drained or anything like that. I feel fine. Of course it takes a toll on you after a while, but you got to play through it. Like I said, I never really banged as much with 5s, so it's something that's new to me. But for the betterment for the team, it's something you've got to get used to."

Davis has missed four games this season, including one for planned rest, and parts of nine others. He missed a career-high 21 games last season, including the final 14 to undergo an ultrasonic debridement of his left knee. The fifth-year big man has yet to play more than 68 games in a season, and he made it a goal this preseason to play a full campaign.

After leading the league in minutes played earlier this season, Davis is averaging 31.0 minutes in January, dropping his season average to 35.9 per game, just shy of a career high set in his third season (36.1).