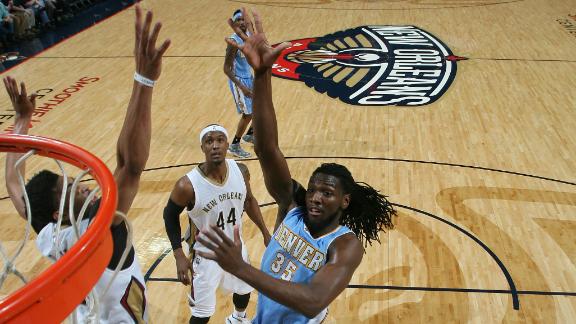 TheNew Orleans Pelicans' futility this season, in which they sit a game out of the playoff picture with a month to play, was perhaps illustrated best byAnthony Davis' performance on Sunday night.

Davis played with historic urgency and abandon. Yet the Pelicans lost 118-111in double overtime to the visitingDenver Nuggets.

Davis, according to the Pelicans and the Elias Sports Bureau, became the first player since blocks were recorded -- in at least 30 seasons -- to have at least 36 points, 14 rebounds, nine blocks and seven assists in an NBA game.

"It's a tough loss, especially in the position we're in," Davis said. "We have to move on and get ready for our next game."

Davis scored six of his points in the first overtime, but missed his only two shots of the final extra session -- both jumpers -- and was unable to get past Nuggets counterpartKenneth Fariedfor opportunities inside.

"A.D. was shooting a lot, making shots, but I stayed the course and I was able to finally get his legs to give out," said Faried, who had five fouls late in regulation but survived both overtimes. "We play at altitude, so we've kind of got the advantage to keep going."

Information from ESPN Stats & Information and The Associated Press was used in this report.