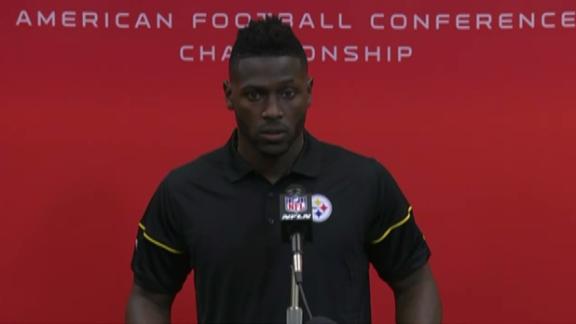 PITTSBURGH -- Antonio Brown said Wednesday he "absolutely regrets" shooting a Facebook Live video from thePittsburgh Steelers'locker room following their 18-16 win against the Chiefs in the AFC divisional round of the playoffs last Sunday.

Brown, who also apologized via a statement on his Twitter account Tuesday night, said he got carried away after getting caught up in the moment of the win.

"I absolutely regret the Facebook Live situation. Total distraction to the organization, total distraction to my teammates. Obviously disrespect to my coach," Brown said. "I've got the utmost respect to our coach so I totally regret that. I stand by my statement last night. Just got carried away in the moment and I lived with that moment from last year, not being able to play in a divisional game."

Brown said his emotions spilled over after waiting for so long to play again in the divisional round of the playoffs, and he wanted to share that moment with fans.

Brown was ruled out with a concussion in the same round last year, a game the Steelers eventually lost to theDenver Broncos.

"You guys don't know what it's like, being ruled out of that game and having to wait 365 days to get that opportunity again. I think last year we played against the Denver Broncos, and I was ruled out on Wednesday, and that's kind of how my season ended," he said. "So, I was extremely excited about the opportunity to get a chance to play in the divisional game this past week and after an emotional win I got a little too excited. But I think my teammates know the type of person I am, what I stand for, and now everyone here knows. I'm excited about this week, to prepare for this game on another big stage, and I'm excited about the opportunity."

He added: "We're not all perfect. I'm human, I'm going to make mistakes, but as a man I own up to those mistakes. I was genuinely excited in that moment, wanting to give the fans the (total) experience in regards of being excited after a game. I think people know what I stand for, what I represent, and what type of person I am."

Brown drew a lot of criticism for his video, which captured Steelers coach Mike Tomlin addressing the team about the Patriots and telling the team to keep a low profile.

"We just spotted these a--h---- a day and a half. They played yesterday," Tomlin was heard saying. "Our game got moved to tonight. We're going to touch down at 4 o'clock in the f---ing morning. So be it. We'll be ready for their ass. But you ain't got to tell them we're coming."

Tomlin later said it was 'selfish' and 'inconsiderate' of Brown to film in that moment, commenting that other star players have moved from team-to-team for being a distraction off the field.

Brown said he doesn't intend to become one of those players.

"Those words that he spoke, I didn't take lightly. That's a big statement coming from my head coach," Brown said.

Brown said he was unaware of an NFL rule that prohibits players from posting on social media until they had fulfilled media obligations after the game. Sunday's video was the latest of several live videos he had shot from postgame locker rooms.

"I was just solely caught up in the moment of genuine excitement and wanted to give the fans a hands-on experience. But I didn't have a clue about it," he said. "We have been doing the live videos after the games. But now I know I'll learn from it and I'll be better moving forward."