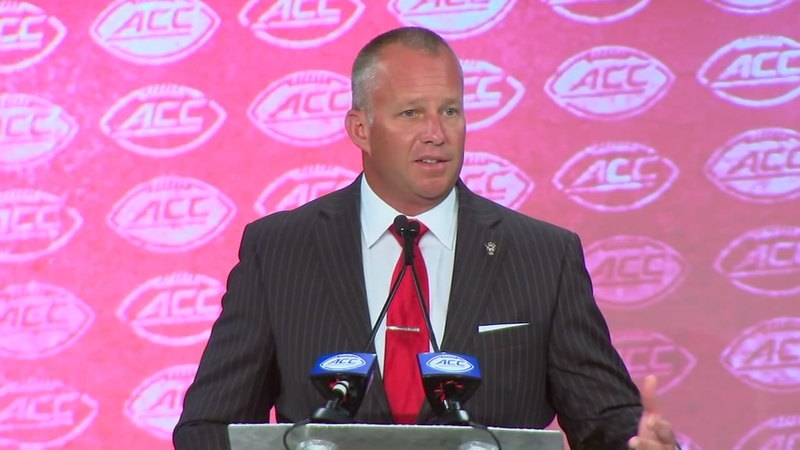 CHARLOTTE, N.C. (WTVD) -- When you don't have a returning quarterback, who your new QB will be is always going to be Question 1 entering the season. Such is Dave Doeren and NC State's predicament in 2019.

The Pack doesn't even have a two-man battle for the job it would appear right now as any of Matt McKay, Bailey Hockman or Devin Leary may emerge as QB1.

Having a three-year NFL caliber QB as his starter was clearly a luxury for Doeren. Dave's a realist, so he knows that with Finley's departure, along with several veteran receivers, expecting the same production from the passing game right out of the gate is a fool's errand.

Here's Dave Doeren very matter of factly tempering expectations for what the State offense will likely look like out of the gate: pic.twitter.com/yS81ofU0JO

But as Doeren said in the above clip, not having the same efficient passing game doesn't necessarily mean they still can't have a highly effective offense.

The offensive line and backfield figure to play huge roles in that.

Multiple starters have been lost along the line, along with position coach Dwayne Ledford, who left for Louisville. There's still great confidence in the group though, at least according to right tackle Justin Witt.

He told me that playing in front of a whiz like Finley certainly made their job easier, but that they're both aware and equipped to provide a bigger buffer for whichever QB wins the starting derby.

As for the backs, Zonovan "Bam" Knight showed some electricity certainly in the spring game, so he could be an immediate contributor.

There is some serious depth there what with sophs Ricky Person and 220-pound, 4.4 burner Trent Pennix also ready to grab more of the limelight.

As for the RBs — talking to Justin Witt — FR Zonovan Knight has “it” quality that makes teammates even stop and notice sometimes when he cuts. Pennix at 220 and running a 4.4 goes w/o saying.

Defensively, Doeren said Wednesday that though he does want an improved pass defense, his primary focus is on the defense figuring out a way to create more turnovers.

James Smith-Williams on why he doesn't anticipate a step back for the Pack this year: pic.twitter.com/udxtfHvuMi

He thinks new defensive assistant Tony Gibson will help spice things up on that side of the ball by hopefully rejuvenating the pass rush.

As for the all-important QB derby, Doeren's in no hurry. He refused to place any kind of artificial deadline on naming a starter. In fact, my sense of the situation is that it could continue into the non-conference season.

Doeren said he wants more turnovers from his defense. Found it interesting then that when I asked about potential “disrupters” on his D, Doeren’s answer was all about the scheme changes Tony Gibson is bringing rather than any players. Hopes blitz will “get home” more often.

Doeren said this year's non-conference holds special importance given the number of spots that need filling and questions that need answering on the offense.

The quarterbacks specifically will be evaluated every day during fall camp. Any number of measurables and intangibles will be weighed.

Doeren was blunt Wednesday. He wants a player to take the job, not just with his play in practice but with his leadership. Prove that you're the man that can't just play well yourself, but bring the best out of your teammates as well.