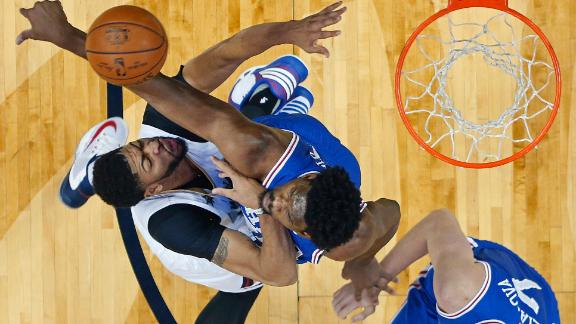 NEW ORLEANS -- Alvin Gentry was defiant when asked if he's concerned about his job status after his New Orleans Pelicans lost their fourth straight game Thursday night. The Pelicans fell 99-88 to the last-place Philadelphia 76ers, who stopped a franchise record-tying 23 road games entering the night.

"I really don't give a s--- about my job status," Gentry said. "I'm gonna work hard, and I'm gonna coach until the day they tell me I'm not the coach here anymore. It doesn't matter. I don't ever worry about that. That isn't anything that I spend five seconds worrying about.

"My worry is how do I get the guys in the locker room to play at the level that I want them to. That's where all my effort goes. It doesn't go anywhere else."

The Pelicans have now lost six of their past seven games following a four-game winning streak sparked by the return of guard Jrue Holiday. New Orleans is now 7-16 overall and in fourth-to-last place in the Western Conference.

Asked if this feels like a low point for the team, Pelicans star Anthony Davis replied, "Yup."

Asked if this is the most frustrated he has been after a loss in his five seasons in New Orleans, Davis replied, "Yup."

However, the Pelicans entered the night ranked 25th in offensive efficiency and second to last in 3-point shooting percentage (31.6).

Davis finished Thursday's loss with 26 points on 8-for-21 shooting and 11 rebounds. As a team, the Pelicans shot 39 percent from the floor and 28 percent from beyond the 3-point arc.

"Even when we won, I thought it was fool's gold," Pelicans forward Solomon Hill said. "We won games, but our ball movement is nonexistent. We come down, pick-and-roll and throw it to AD, and you just have AD scoring over three people. We want to get him in position where it's two at [most], or one.

"We have to come down [and] move the ball, move the ball and then get it to AD. I think we just come down and throw it right to him and we just wait and watch. We can say we want ball movement, but when he's going, everybody's out there watching."

"I think it's hard to measure because we've got so many people in and out, on this and on that, restricted this, that I don't think we have a fair handle on what kind of team we even have," Gentry said. "That's the frustrating thing, I think. I think we got confident guys. Obviously your confidence is going to be a little bit rocked when you lose five, six straight games. That's just the way this league is. But you've got to find a way to regroup, and you keep moving forward."

New Orleans players cumulatively lost 351 games to injury and illness last season, the second most by a team in the past decade, and the team used an NBA-high 42 different starting lineups last season.

Asked if he ever envisioned the Pelicans' situation getting this bad when he took the job during the 2015 playoffs, Gentry said, "No, I didn't expect this, no. But we have who we have. And the bottom line is, I don't care who we have in the locker room. All I expect is them to do is compete and play hard, which they've done most of the night, and then we've got to try to find a way to execute. And then we've got to make some shots. We've got to knock down some shots. That's the bottom line."

The Pelicans next face a road back-to-back this weekend against the Los Angeles Clippers and Phoenix Suns.