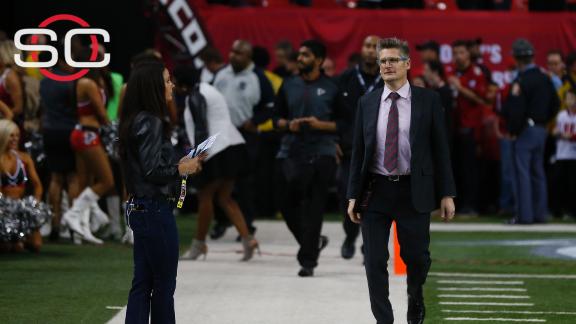 There has been uncertainty regarding the status of Dimitroff, who accepted a reduced role after the hiring of first-year coach Dan Quinn. But Quinn said part of the reason he took the job was the partnership with Dimitroff, and Blank cited that working relationship as a reason for keeping his GM.

"Over the last week, we have conducted an exhaustive review of every area of our team," Blank said in a statement. "Through this process it has become very clear to me that Coach Quinn and Thomas Dimitroff have built a productive working relationship over the last 11 months. There is very good alignment between Dan and Thomas on the direction we need to go to improve our team and I believe maintaining the continuity of that relationship, with Scott Pioli continuing to assist Thomas, is the right way forward."

Blank said changes will be made to the pro personnel and college scouting departments after the Falcons finished with an 8-8 record and missed the playoffs for the third consecutive season.

"My commitment to our fans is to put the best possible product on the field each year," Blank said. "No one is satisfied with an 8-8 record, but I am very pleased with the direction of our team under the leadership of Dan Quinn and confident in his long-term approach. No question, we took some positive steps forward this year and have a good foundation our existing coaching staff can build upon."

Dimitroff was responsible for the drafting of Julio Jones, Matt Ryan, and Desmond Trufant, but he also had numerous draft failures and free-agent misses. None of his 2012 draft class remains in the NFL.

Once Quinn was hired, Blank gave him control over the 53-man roster, with Pioli given more responsibilities regarding the draft.

Quinn has been an advocate of the relationship with Dimitroff all along, saying the partnership was part of the reason he took the job in the first place.

The Falcons have just one playoff win in five appearances since Dimitroff became general manager in 2008.