Baylor should be college basketball's No. 1, plus the ACC is a mess 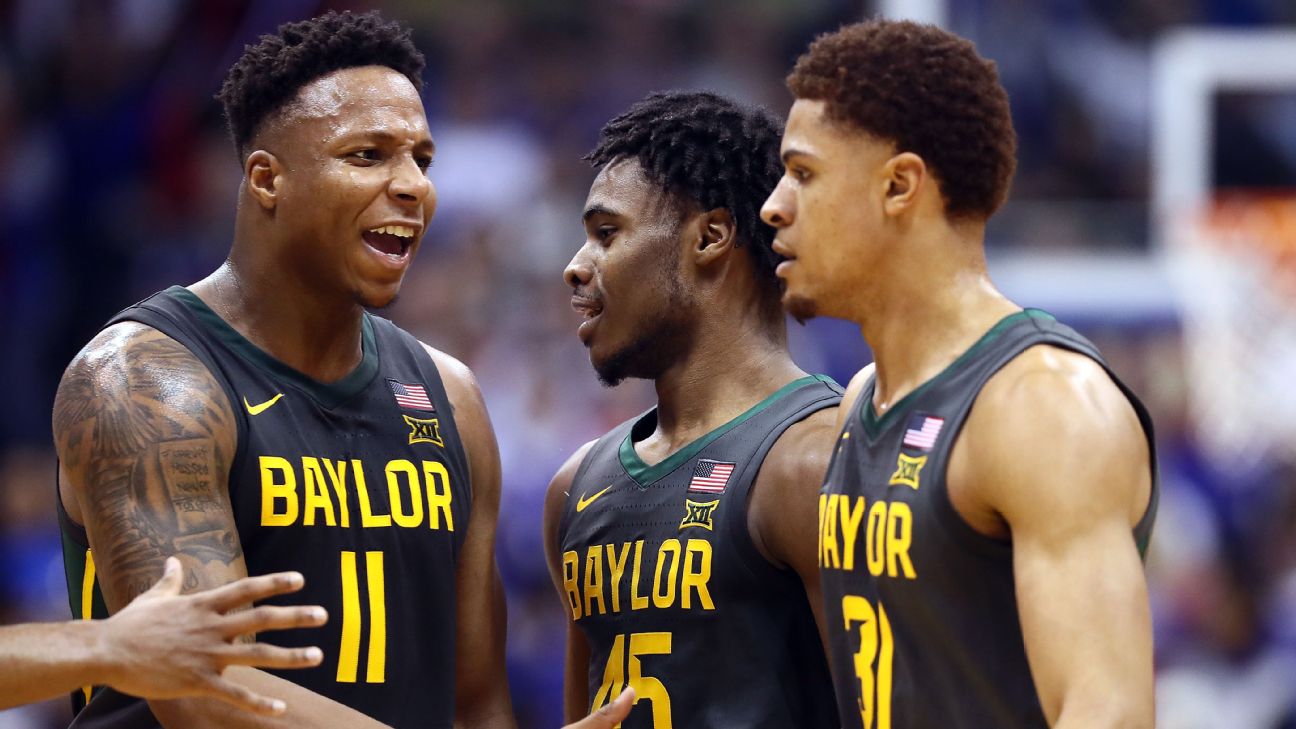 Saturday's front-loaded slate had only two games featuring two top-25 teams, but we were not without storylines.

The biggest talking point will be the end of North Carolina's 59-game home winning streak against Clemson, but we'll get to that -- and Brad Brownell's reaction -- in a bit. I'll also get to Baylor's ending its 17-game losing streak at Kansas.

Before that, though, some quick-hitters:Myles Powell and Seton Hall beat Marquette, even though Markus Howard slightly outdueled Powell in a battle between two of the most electric players in the country. West Virginia freshman Miles McBride continued his surprising breakout campaign in the Mountaineers' win over Texas Tech, scoring 22 points off the bench, his sixth straight double-figure scoring game.Ryan Daly had one of the wildest buzzer-beaters of the season -- even if it came in a losing effort. Illinois is the Big Ten team du jour after it beat Rutgers for its third win in a week. Kentucky's Immanuel Quickley continued his hot shooting from behind the arc and is now 14-for-23 in the Wildcats' four-game winning streak. Top-ranked Gonzaga rolled, as did No. 2 Duke. Auburn and San Diego State remained undefeated.

1. Baylor should be the No. 1 team in the country

No. 4 Baylor won for the first time at Allen Fieldhouse on Saturday, finishing the first half on a tear and keeping No. 3 Kansas at arm's length throughout the second half en route to a 67-55 victory. With the win, there's a very strong argument that Baylor should be the No. 1 team in the country when Monday's polls come out. Résumé-wise, there shouldn't be much of a debate. Scott Drew's team now has road wins over Kansas and Texas Tech -- both in the past four days -- as well as a neutral-court victory against Villanova and home wins against Butler and Arizona. The lone loss came in Alaska against Washington on Nov. 8, a game the Bears led until essentially the final minute.

If you're an eye-test person, the Bears pass that, too. They're an elite defensive team, ranking in the top 10 in scoring defense and the top five in adjusted defensive efficiency. They force turnovers, block shots and contest in the half court. Davion Mitchell is a high-level individual defender. Offensively, Baylor has one of the best guard duos in the country in Jared Butler and MaCio Teague. Mark Vital is a glue guy, and Freddie Gillespie has provided rebounding and defense down low. Perhaps the most surprising thing about the Bears this season is that last season's best player, Tristan Clark, has been a bit part of the rotation, because of injuries, and Baylor has survived. Survived all the way to No. 1 in the country?

A couple of thoughts on Kansas:Devon Dotson was hampered by a hip pointer throughout the game, going to the locker room for a long stretch in the second half but managing to play 28 minutes. One of the Jayhawks' issues all season has been their lack of a consistent secondary ball handler or a backup point guard behind Dotson. Marcus Garrett can play that role, but it's a completely different dimension with Dotson. Defenses can drop back a bit more, making it tougher to get the ball to Udoka Azubuike inside. Azubuike had seven blocks but had one of his worst offensive games of the season, finishing with six points.

Since adding Notre Dame, Pittsburgh and Syracuse after the 2012-13 season, the ACC has received at least six bids to the NCAA tournament every season. Right now, there's no guarantee that the league will get much more than half that number.

On the surface, that sounds absurd, but bear with me. Duke, Louisville and Florida State are locks to hear their names called on Selection Sunday, and all three are top-15 teams nationally. Besides those three, though, the league is a complete crapshoot. And that showed on Saturday.

Virginia would seem to be the fourth-best team in the league, but the Cavaliers lost at home to Syracuse on Saturday after falling at Boston College on Tuesday. Tony Bennett's team has losses to the Orange, the Eagles, South Carolina and Purdue -- four teams with a combined 27 losses heading into Saturday. Virginia's best win this season? Either home over Virginia Tech or at Syracuse. That isn't exactly a glowing endorsement of the Cavaliers' résumé.

Any hope North Carolina had of turning this season around might have gone by the wayside on Saturday, as the Tar Heels lost to Clemson. At home. For the first time ever. That's right: Clemson was 0-59 all time against North Carolina in Chapel Hill. The Tar Heels blew a 10-point lead in the final two minutes of regulation and lost in overtime. North Carolina is 8-8 overall and 1-4 in the league.

Virginia could turn things around, or NC State or Virginia Tech (the Hokies beat the Wolfpack on Saturday) could emerge as a consistent factor, but right now, there are three teams at the top, and then there's everyone else.

For the first six weeks or so, Ohio State was in the conversation to be the best team in the country. The Buckeyes started 9-0, lost to Minnesota and then bounced back to beat Kentucky in Las Vegas. Since that win over the Wildcats, though, Chris Holtmann's team has dropped four straight games, with the latest coming Saturday at Indiana. The Buckeyes are 11-5 overall and 1-4 in the Big Ten ... tied with Northwestern for last place. That isn't where anyone expected Ohio State to be at this point in the season.

What's going on? There are issues at both ends of the floor, but the struggles are more apparent on offense. In some ways, it's as simple as the fact that Ohio State isn't making shots. During the four-game losing streak, the Buckeyes are shooting 33.6% from the field and 28.9% from 3-point range. On the season -- including the losing streak -- Ohio State is 50.9% from 2-point range and 37.7% from 3-point range. The Buckeyes have gone cold, for one. But some of that also stems from a lack of guys who can go and get their own shots. The Buckeyes' best offensive player is Kaleb Wesson, but he's 6-foot-9, 270 pounds. He can't really initiate offense for himself. Freshman D.J. Carton has shown flashes, but he has also had turnover issues and is 5-for-20 from 3 during the losing streak.

It seems like every day there are another two or three intriguing games in the Big Ten. Sunday is no different. Conference leader Michigan State heads to Purdue, and Michigan travels to Minnesota. The Spartans have won eight in a row, and the consensus preseason No. 1 team in the country is starting to round into form after a difficult first month. Cassius Winston totaled 59 points and 15 assists -- with just four turnovers -- in Michigan State's previous two games. Purdue is on a two-game losing streak and can't continue to slide with a road trip to Maryland on tap. Lose both and the Boilermakers are suddenly 9-9 on the season.

Michigan has cooled off after an unbeaten first month of the season, going 4-4 in its past eight games. But the Wolverines have also missed Isaiah Livers for essentially the past four games and are hoping to get him back soon. Minnesota needs to win to stay above .500, but at least we get another chance to watch Golden Gophers star Daniel Oturu. Oturu has been one of the most dominant players in the country at both ends of the floor this season. Michigan's Jon Teske will have his hands full.

Arizona is better than its 11-4 record, sitting at No. 7 in the BPI and in the top 10 at KenPom. But the Wildcats are lacking in two areas: impressive wins and road wins. They can help at least one of those categories Sunday at Oregon State.

Dating back to last season, Arizona has won one of its past nine true road games ... and it came at Oregon State on Feb. 28, 2019. The Wildcats suffered a brutal, one-point, overtime loss on Thursday at Oregon and need to bounce back from their recent 2-4 stretch. Oregon State is also struggling, losing three of its past five -- with one of the two wins coming last weekend at Colorado. Do the Beavers have an answer for Nico Mannion?

Gregg Marshall's Wichita State Shockers are one of the hottest teams in the country the past six weeks, having won eight in a row, with the last loss coming against West Virginia in Mexico in late November. During that stretch, though, Wichita State has gone on the road only once, notching a 19-point away win over Oklahoma State on Dec. 8.

Since then, the Shockers have been home for six straight games. On Sunday, they will head to UConn, which is trying to regain some of its early-season momentum. Back in November, the Huskies beat Florida and Miami and took Xavier to two overtimes. Wichita State's win over Memphis on Thursday made it clear that the Shockers are going to be a factor in the American conference title race, but now the Shockers need to show that on the road. A win should move Wichita State into the top 20 nationally. 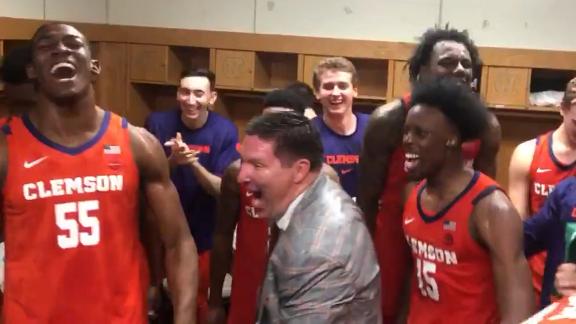