Bills to Patriots: Respect our sideline and move on 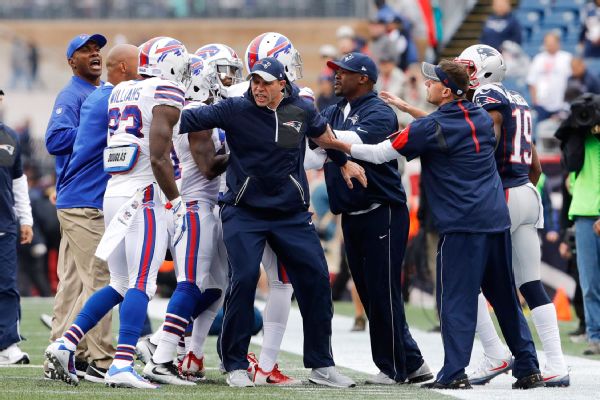 Bills safeties Robert Blanton and Aaron Williams and cornerback Nickell Robey-Coleman were each fined for a pregame scuffle Oct. 2 that erupted when Bills players felt "disrespected" by Patriots quarterback Jacoby Brissett jogging through their warm-up drills at Gillette Stadium. No Patriots players were fined.

"It's gonna be the same reaction that they got last time," Robey-Coleman said Wednesday. "There ain't no other way around that situation, you know? Just respect each other's sideline and move on."

When Robey-Coleman, who was fined $9,115 for his role in the altercation, was asked whether he would be comfortable being fined again, he responded, "Yes."

Cornerback Stephon Gilmore was not involved in the Week 4 fight but said players would retaliate again under the same circumstances Sunday.

"Of course," Gilmore said. "We're not gonna let nobody push us around. You know what I'm saying? We're gonna play smart. We know them guys like to try to get under your skin and make you react a certain way. We're gonna try to take it in between the lines and play good football."

Robey-Coleman does not believe that quarterbackTom Brady, who was suspended for the team's previous meeting, will run through Buffalo's pregame drills as Brissett did.

"We know that ain't gonna happen," Robey-Coleman said Wednesday. "Not in the New Era [Field]. I ain't even need to hype myself up like it's gonna happen. I ain't worried about that.

"I don't expect [Brady] to do that. Tom is a pro, and he goes about his business well. I'm pretty sure that he's not even gonna give us that ammunition."

Brady said the Patriots always have respected their opponents.

"I don't think our team has ever been built on doing something where we would try to incite something," he said in a conference call with Bills media.

Bills coach Rex Ryan said the scuffle had nothing to do with the team's 16-0 win in Week 4. He also said it won't affect what happens come this weekend.

"Any of the extracurricular things, there's absolutely zero focus on that and shouldn't be any focus on that," Ryan said. "It's just about playing games. If people want to show how tough how they are, put the boxing gloves on and get in the ring or something. That might be more impressive. I don't wantGronk, by the way. But so I definitely don't want to see that happen, and our focus is 100 percent on the game and doing the very best we possibly can."

Patriots counterpart Bill Belichick expects the focus of his team to be where he always expects it.

"I think what we need to do this week is go up there and play a good football game in all three phases of the game," he said.

Information from ESPN's Mike Reiss was used in this report.