They're writing in the Post today about how yesterday's Duke-St John's game brought MSG back to basketball life - at least for an afternoon. I haven't been here for the Knicks horrific play or the relative non-entity St. John's has become, but I can testify that yesterday was live, the kind of contest fitting the magnitude of the moment.

It was a weird game. There weren't so much ebbs and flows as entire separate chapters, the momentum swings so...momentous that even Mike Krzyzewski, he of the epic 1000 wins (and hundreds of losses) said he's never been a part of anything like it. That's saying something.

Duke seemed to autopilot its way to a 21-10 lead early with Jahlil Okafor bouncing Johnnies around like so many traffic cones. But then, for the middle 20 minutes everything went way off script. Duke's defense went entirely AWOL, the perimeter guys entirely incapable of preventing the likes of Sir'Dominic Pointer and Rysheed Jordan from getting wherever they wanted whenever they wanted. Usually the rim, or close by. Pointer was particularly spectacular.

With just over 8 minutes left, Duke was dead in the water. There was no reason, zero, to believe they had any shot at a comeback. But then Marshall Plumlee and Matt Jones happened. They were only in the game because of foul trouble to others, but they took that opportunity and turned the game. Not on the scoreboard so much -- they combined for a mere 6 points -- but on the court. As Marshall said afterwards, 'We hadn't been making tough plays, winning plays. I knew I had to be ready and make the most of my opportunity.' He and Jones did, with 11 rebounds and a forcible demeanor change for the Blue Devils.

What followed was an avalanche of and 1's and huge threes. Okafor pounded his way to the rim again and Tyus Jones and Quinn Cook rained down j's. What had seemed a lost cause just minutes earlier now became inevitable. Another Duke win. A signature Duke win in what K called a 'magical place'. He'd have preferred the milestone to come at Cameron, but this was a pretty good second choice.

What more to say about K's accomplishment? Literally everything has been written about his career leading up to this game. The man's one of, if not THE alltime faces of this great college game. I had to nod afterwards in agreement when he said it was neat to get to 1000 first, but that he was most proud of the quality of the wins. 1000 wasn't built on backwater blowouts. It was built in the crucible of the ACC and the NCAA tournament.

Asked about his future, Krzyzewski said the end is 'sooner than later' but hopefully 'not real soon'. Flanked by his family at the press conference, he talked about his continued verve for the game, the 'energy' he still feels for the job.

That continues to be bad news for the rest of college basketball.

Some scenes from the Garden:

Carmelo Anthony was at the game and showed up by Duke's locker room afterwards. He was immediately surrounded by some NY media types and asked about his impressions of Okafor. His response -- 'he's a handful.'

Melo ducked out when asked if he wanted the Knicks to draft Jah, which led to this funny scene of him skirting past the arriving Duke players:

NCAA President Mark Emmert was also at the game and congratulated Krzyzewski afterwards.

One sweet moment inside the postgame chaos? Many of Krzyzewski's young grandkids were buried in the postgame media mass outside the Devils locker room. Amid the noisy chatter -- one of the grandkids asked his mother 'when do we get to see Poppy (Grandpa K)?' He may have just cemented his legend even further, but to the most important folks, he's just Grandpa in the end. 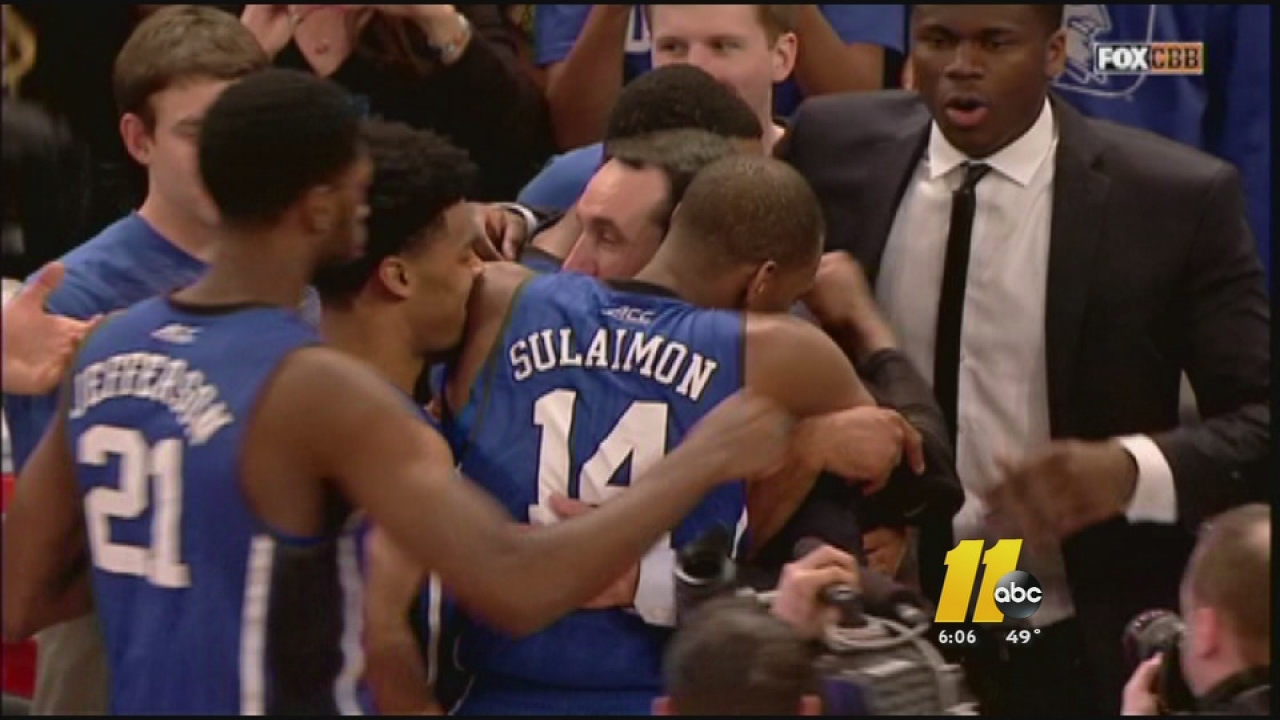