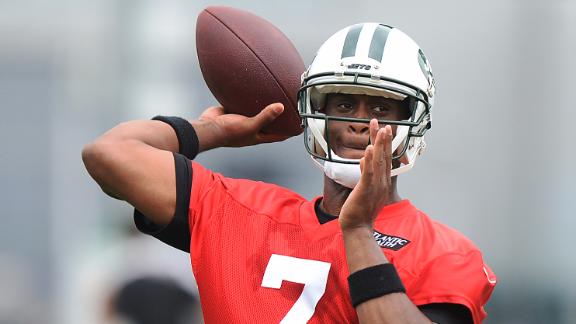 "Did he put his finger in his face? No, he didn't," Marshall said on Mike & Mike on ESPN Radio. "Geno Smith, he didn't do anything wrong that day. It's just an unfortunate situation.

"It's a body blow for us, but we have to move forward. We'll probably have another couple of days ... probably a couple of weeks of the New York media (asking) the team questions, but we're built for this. We don't want any distractions."

Marshall became the first player to publicly give unwavering support to Smith, who was punched in the jaw by Enemkpali. The linebacker was immediately released and since has beenclaimed on waiversby theBuffalo Bills. Smith suffered twofractures, underwent surgery, and will be sidelined six to 10 weeks.

Coach Todd Bowles said Smith was "sucker punched." ESPN analyst Ryan Clark, who said he spoke directly to Enemkpali, reported that Smith stuck a finger in the linebacker's face and said, "You're not going to do anything about it."

They were arguing over $600, traveling expenses for Smith to attend Enemkpali's football camp in Texas last month. Smith was unable to attend and Enemkpali wanted to be reimbursed.

Several Jets players have commented about the incident, and most of them offered cryptic remarks about what actually happened last Tuesday. Cornerback Darrelle Revis said both players bear responsibility.

Since then, Smith has been cast in an unflattering light, with questions emerging about his maturity and leadership ability. He didn't help matters by playing catch with a friend at his apartment only two days after surgery, prompting a reprimand from the team.

Marshall didn't want to talk about the incident when approached by reporters last Thursday after the Jets' first preseason game, but he wasn't shy about defending Smith on Monday during interview with national media outlets.

Marshall told FOX News Channel's "FOX & Friends" that Smith "did everything the right way" on that fateful day in the locker room.

"People think it's a distraction. It is. It sucks. It was shocking. I'm very disappointed," Marshall said. "I feel bad for the kid, because he was doing really good. But we have to move forward if we want to win. Geno knows that."

Later, Marshall told Mike & Mike that he has been "proud of the kid since I've been here, but I'm not answering any more Geno Smith questions."

Marshall has been a Smith supporter, saying during the offseason that the main reason he wanted to be traded to the Jets was the opportunity to play with Smith. The new teammates wound up living together at Smith's apartment during the spring.