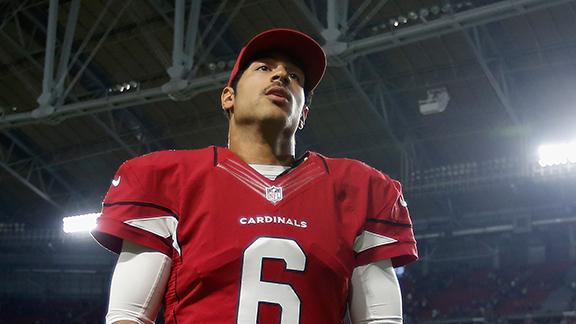 TEMPE, Ariz. -- Arizona Cardinals coach Bruce Arians said Monday at his news conference he was leaning toward starting rookie quarterback Logan Thomas against San Francisco on Sunday, then minutes later declared on a local radio station that Thomas would indeed get the nod in the regular-season finale.

Thomas has played in just two games this season, replacing Drew Stanton in Denver in Week 5 and getting one snap Sunday against the Seattle Seahawks on Sunday. He's completed 1 of 9 passes for 81 yards and a touchdown this season.

Arians said the decision to bench Ryan Lindley wasn't a reflection of how the third-year quarterback played Sunday night, when he completed 18 of 44 passes for 216 yards in a 35-6 loss to Seattle.

"I think we need to find out what [Thomas] can do for the future in the playoffs, if it were to come to that," Arians said. "That's my job, to make sure that we cover every base. I thought in no way would it be a reflection of the way Ryan played, only the chance for Logan to show that he can do something."

Stanton will not be an option for Arizona in San Francisco, Arians said. Stanton, who suffered a right knee injury against the St. Louis Rams in Week 15, suffered a setback when his knee swelled after Thursday's practice.

Arians said on the radio that even if Stanton was healthy enough to play against the Niners, he won't play. Arians said he'll have a quick hook with Thomas, even going as far as pulling the rookie during practice if he doesn't see the kind of progress with the starters that Arians has in mind.

With the NFC West title and home-field advantage throughout the playoffs still in play, Arians said he won't hesitate to insert Lindley in San Francisco if the game starts getting away from Thomas.

Thomas' one play Sunday -- an incomplete pass in the second quarter -- wasn't part of the package Arizona prepared for him. Arians said once the Cardinals went down two scores, Thomas' package wasn't part of the game plan anymore.

Arians wants to see how Thomas plays after a full of week of practice, instead of being plugged into situations because of injury.

"I think he had a real good week of practice in the package we had for him," Arians said. "I need to find out some things about him before we get any further into this season."