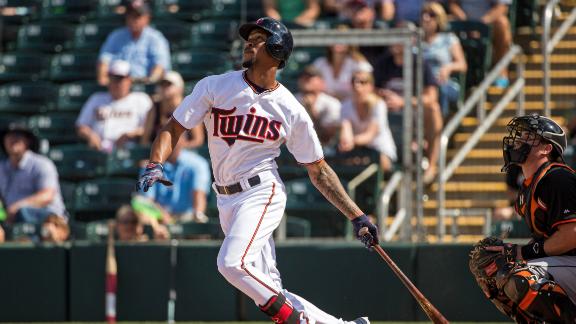 ARLINGTON, Texas -- Byron Buxton, one of the top prospects in the minors, is being promoted from Double-A to make his major league debut in the Minnesota Twins' depleted outfield.

The Twins announced Saturday their plan to select his contract from Chattanooga. The 21-year-old Buxton will be in uniform Sunday for the finale of a three-game series in Texas.

"Everyone hopes that he'll come in and make it tough to think about sending him back,'' manager Paul Molitor said. "We have a lot of confidence. ... He's an exciting player, but he's still learning how to hit.''

Minnesota outfielder Torii Hunter is serving a two-game suspension for his uniform-tossing tirade at the umpire and Aaron Hicks was scratched for his spot in center Saturday because of an elbow problem. The Twins have lost five in a row and recently fell out of their surprising spot atop the AL Central.

"Today we had one guy on the bench, except for Hicks potentially pinch running, and it would be the same (Sunday). It's not good,'' Molitor said. "It was the right time to try to get us a center fielder.''

Buxton was the second overall pick in the 2012 amateur draft. He was chosen right behind shortstop Carlos Correa, who made his major league debut for Houston on Monday.

Buxton is No. 3 on ESPN Baseball Insider Keith Law's latest list of top prospects. The No. 1 player on that list is Correa.

In 59 games for Chattanooga this season, Buxton hit .283 with 12 triples, and scored a Southern League-high 44 runs. He also had 37 RBI, 20 stolen bases and six home runs.

Buxton kept up his rapid ascent to the majors in the last year despite a variety of injuries, having sustained a concussion, a wrist problem and a dislocated finger.

Buxton played Friday night at Birmingham and was out of the lineup Saturday. He went 2 for 4 in that last game in Double-A and, showing an aggressive running style, was thrown out on the bases for the second straight day.

Drafted from high school in Georgia, Buxton has been on a fast track to the big leagues. With two-tone hair, he already has star power -- on Friday night, he tapped both the both Barons catcher and plate umpire on the shin guards when he walked into the batter's box to lead off the game, then easily beat a chopper to shortstop.

The surprising Twins are 33-28 and in second place in the AL Central. They will make a corresponding move before Sunday's game.