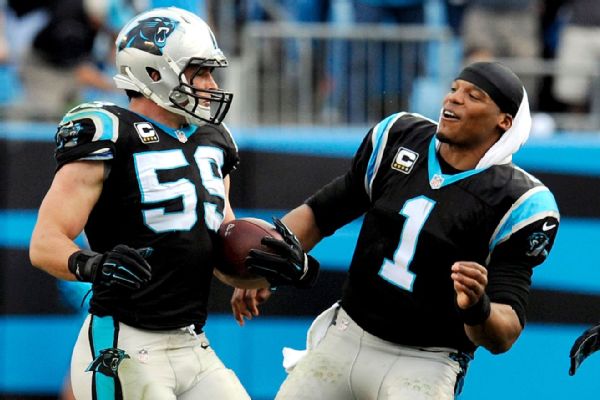 This came 24 hours after Kuechly, who was held out of Monday's game at Washington by coach Ron Rivera despite being cleared from the concussion protocol two days earlier, made it clear he wanted to play.

"Listen, it's no denying the truth,'' Newton said Thursday. "At this particular point, our chances of making it to the playoffs is minimal. Now, Luke is a player that could potentially be the greatest linebacker to ever play. Straight up.

Rivera hasn't officially ruled Kuechly out for Saturday's home finale againstAtlanta, but he said he will err on the side of caution whenmaking the decision.

Newton suffered a concussion in the final quarter of a Week 4 loss at Atlanta that forced him to miss one game. It was the first concussion of his career, and he learned a lot from it.

"You can't rush that,'' he said of the recovery process.

Kuechly was in the concussion protocol for three games after suffering the injury in a Nov. 17 win against New Orleans. He also missed three games last season with a concussion.

Carolina (6-8) has a 0.0005 percent chance of making the playoffs for the fourth straight year.

"So he can take all the time he needs, because the long-term goal for this team is to be in the playoffs and to play for Super Bowls,'' Newton said of Kuechly. "If our guy is not healthy, who is there to blame? We want him to get back to 100 percent.

"We want him back out there, but at the end of the day, if he's not ready to be back there, just take your time.''

The Panthers have had eight players receive an NFL-high nine concussions this season. Left tackle Michael Oher went into the protocol before the Oct. 2 game against Atlanta with a concussion that is believed to have happened a week or so earlier.

Newton understands Kuechly's desire to play. He wanted to play in the 2014 opener against Tampa Bay a few weeks after fracturing his ribs in a preseason game, but Rivera held him out because the medical staff advised an extra week would be beneficial.

Newton said the concussion he received on a hit from linebacker Deion Jones while trying to score on a 2-point conversion against the Falcons began a learning process on concussions that has "enlightened'' him.

"It's nothing to play with, I can tell you that. You see guys that have stuff stemming back from their concussion years removed from the game. This game brings a lot of joy, and also it's a lot of repercussions that come with it.''
Related topics:
sportsespnron riveraprotocolcarolina panthersnfldeion jonescam newtonmichael oherconcussionluke kuechly
Copyright © 2022 ESPN Internet Ventures. All rights reserved.
TOP STORIES
Snow, then icy conditions as winter storm moves over central NC
Roads began to deteriorate as snow, ice accumulate
LATEST: Deadline extended for House Wake COVID relief program
City, county governments close services as wintry weather hits NC
Raleigh Police investigate after man shot
Ford recalls 200K cars because brake lights can stay on
Laundrie claimed responsibility for Petito's death in notebook: FBI
Show More
US confirmed 1st COVID case 2 years ago today
Louie Anderson, Emmy-winning comedian, dies at 68
How to drive on snow, ice and get out of a skid
Raeford man killed in Fayetteville motorcyclist crash
Many COVID-19 vaccine side effects caused by placebo effect: Study
More TOP STORIES News