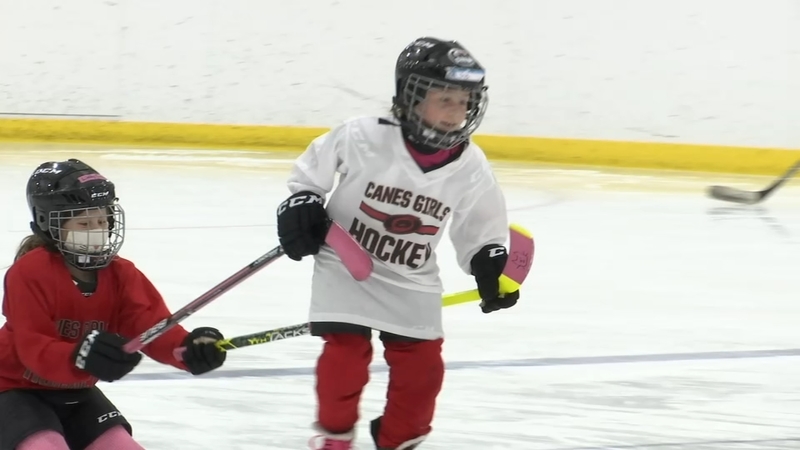 RALEIGH, N.C. (WTVD) -- A Saturday afternoon inside the Wake Competition Center -- full of hope and inspiration about the future of hockey.

"It really inspires me a lot to see that girls can play hockey as well," said 10-year-old Chloe Feliciano.

"You want to make sure they leave with a smile on their face and I think all of the coaches do as well," said Alyssa Gagliardi. "That's the goal every single session that we do with this program, that it leaves you feeling good and inspired for the next generation."

Gagliardi is the mastermind behind the Canes Girls Youth Hockey program - a project that the Carolina Hurricanes are investing $215,000 into as part of the NHL's goal to grow the sport.

"For me, hockey has been my life since I was 8 years old," Gagliardi said. "I know the friendships it's brought me, the job opportunities ... if we can give a little bit of that to the next generation of girls who just love putting on their skates and their helmet and grabbing their stick and going to play then that's what we want to do."

One of the goals of the program is to provide female role models. At the top of that list is Kelsey Koelzer -- the first Black player to be selected first overall in the NWHL Draft and a guest coach for this weekend's session.

"You see how much folks are respecting women and you see the power they have in growing the game as a whole," Koelzer said. "That's something I think you can't put a price tag on that.

"If I can add a little excitement and a little bit of passion to that and show them where hockey can get them then that's what I'm most excited about," she added.

Gagliardi said it's a bonus to have Koelzer's presence. It gives young girls someone to look up to who has blazed a path.

"She can share her experience of playing but also now coaching with this next generation to have dreams to maybe play college or beyond," Gagliardi said. "For us, it's really special to have another voice to have some other experience that we can offer to this next wave of players."

"If you have a love for the game, nobody's words or thoughts should interfere with that," Koelzer said. "If you believe you belong there, then you belong there and no one is going to change that."

She hopes this groundwork can eventually change the perception of hockey among minorities, especially women.

"Hopefully, down the line, girls like myself won't second-guess the fact that they're playing a White, male sport, and hopefully down the line, it won't be considered a White male sport," she said. "Having that kind of reward for the work that I've put in throughout the years and to know that I am making a difference in even one girl's life, it's definitely special."
Report a correction or typo
Related topics:
sportsraleighhockeycarolina hurricanescool kidsgood sports
Copyright © 2021 WTVD-TV. All Rights Reserved.
More Videos
From CNN Newsource affiliates
TOP STORIES