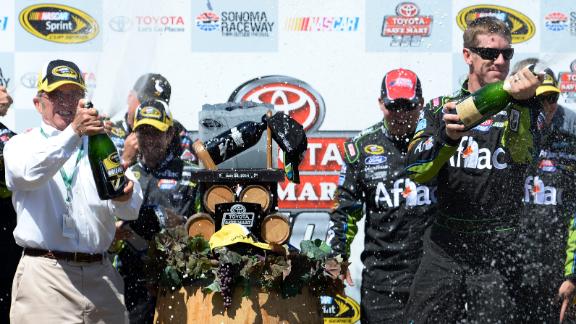 SONOMA, Calif. -- Carl Edwards has never been known for his road racing skills -- to the point team owner Jack Roush had to send him testing in a two-seater so Boris Said could teach him the basics.

A decade later, Edwards finally has a win to show for his hard work.

And, he beat road racing ace Jeff Gordon to get to Victory Lane on Sunday at Sonoma Raceway, where Gordon leads all drivers with five wins.

"My road racing progression, it's been a pretty long climb," Edwards said. "The real special part to me was to stand in Victory Lane at Sonoma and have Jeff Gordon come and give me a handshake as the second-place finisher. I grew up watching Jeff Gordon, and specifically watching how he drove this racetrack and all the successes he had here, so I mean, that's really super. It's something I'll never forget."

Edwards' win made Roush Fenway Racing the unlikely organization to end Hendrick Motorsports' five-race winning streak. And, the win came a week after Roush was shut out at Michigan, where the organization failed to put a car in the top 10 for the first time since 2000.

Edwards took the lead on a restart with 25 laps remaining and seemed to have the win wrapped up until Gordon nearly chased him down on the final lap. Gordon had one good look at Edwards and couldn't pull off the pass.

"That last lap was ugly," Edwards said of trying to hold off Gordon.

It wasn't a terrible day for the Hendrick organization, which had won every Sprint Cup Series race since Gordon's victory at Kansas on May 10. Instead, HMS settled for all four of its drivers finishing in the top seven.

Gordon, the Sprint Cup Series points leader, wound up second. He said he made one mistake in overdriving a turn with about five laps to go that allowed Edwards to build a healthy lead.

"I just couldn't put enough pressure on him," Gordon said. "I think had I put some more pressure on him, I saw him really struggling with the (tire) grip level, but he did everything he needed to do. That last lap, I gave it my best effort and closed up on him and he didn't overdrive it. I was hoping he might slide up and I'd get a run on him."

Dale Earnhardt Jr. was third after rallying from an incident that wrecked Matt Kenseth, and was apologetic on the radio and after the race.

"I tried to screw it up a couple times in the race, but I calmed down and was able to get a good finish," Earnhardt said after his career-best finish on a road course. "I got into Matt, I jumped a curb and jumped into the air and just ran into him. Totally my fault. I hope he's not sore with me."

Kasey Kahne bounced back from an early flat tire to finish sixth and Jimmie Johnson was seventh.

The highest-finishing Toyota was Clint Bowyer in 10th. Bowyer was the leader on a restart with 31 laps to go, was passed by Ambrose, and then got a flat left rear tire. The tire problem led to McMurray turning Bowyer, and as Bowyer's car was stopped in the middle of the track, bottleneck traffic caused Kevin Harvick to run into Bowyer.

"We got ourselves in position and had a flat. It was going down and I was all over the place," he said. "Jamie just kind of finished me up and got me out of the way. Bad luck, man."

Edwards' win is his first career victory on a road course, and he'd never been higher than third at Sonoma. More important, it was his second win of this season and locks him into the Chase for the Sprint Cup championship field.

It was Edwards' 23rd win of his career, the 135th Sprint Cup Series victory for car owner Jack Roush, and it made Edwards the 10th consecutive different winner at Sonoma.

Crew chief Jimmy Fennig said the race played into their hands after pitting with 40 to go and then a caution came out and Fennig made the call to not bring Edwards in a second time under yellow. The strategy moved Edwards toward the front of the field and he moved his way to the front.

"When you got somebody like Carl behind the wheel, and you put him out front, he's going to get it done," Fennig said. "To have two wins right now and to be locked in really feels good."

Carl Edwards Wins At Sonoma
Carl Edwards picked up his second win of the season with a victory at Sonoma Raceway.