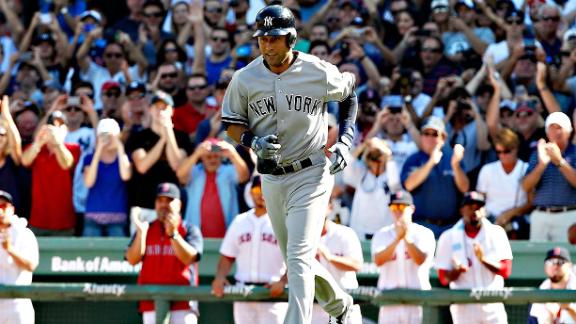 "I think Derek did it as well as anyone can,'' Cashman told ESPNNewYork.com. "He wore it well, and I'm not a big advocate of giving out the captaincy anyway. I'm not going to recommend anyone being named captain of the New York Yankees right away.''

Earlier in the day, Cashman had said on ESPN New York Radio 98.7 FM that he did not see a viable candidate in the Yankees' clubhouse to succeed Jeter as the 16th captain in team history, a list that includes Babe Ruth, Lou Gehrig, Thurman Munson and Don Mattingly.

"And that's not disrespectful of any of the guys I have here that have a lot of leadership,'' Cashman said. "As far as I'm concerned, and I'm not the decision-maker on this, that captaincy should be retired with No. 2. I wouldn't give up another captain title to anybody else.''

Manager Joe Girardi emphasized that the lack of a captain doesn't mean a lack of leadership in the Yankees' clubhouse.

"We give the freedom to our guys in the clubhouse, whoever wants to speak up, I don't care how many days [in the big leagues] you have, you can speak up," he said.

Cashman has made similar statements before, notably at Fenway Park after Jeter's final game last Sept. 28. And he pointed out Thursday that there are often many different leaders within a big league clubhouse, even during Jeter's 11-year tenure as captain, the longest in Yankees history.

"Everyone knows that Mariano Rivera took care of the relievers and Andy Pettitte took care of the starters,'' Cashman said. "And of course the managers, Joe Torre and Joe Girardi, were leaders as well. So I'm not an advocate of one guy being 'the guy.'"

Jeter was named captain in 2003, eight years after Mattingly retired, and he held the title until his retirement at the end of last season. Among the current Yankees who could be considered possible successors to Jeter are Brian McCann, Mark Teixeira, Chase Headley, Brett Gardner and Alex Rodriguez.

"It's not my call anyway, it's an ownership call," Cashman said. "But I'm not in any big rush to name a new captain.''

"I didn't think we needed a captain this year, and I think guys need to lead," Girardi told ESPNNewYork.com. "I don't think you necessarily have to have a captain to have leaders.

Will Yankees Name Another Captain?
Wallace Matthews discusses comments by Yankees general manager Brian Cashman, who indicated the organization would be unlikely to name a new captain anytime soon.